Home Aerospace Aircraft Charting the International Path for the F-35 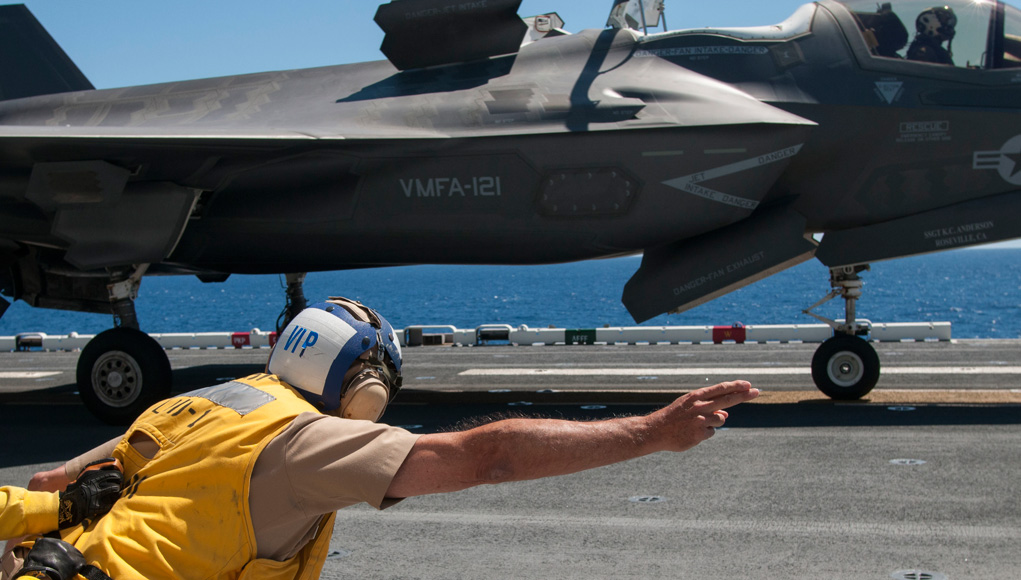 The F-35 will be reaching a critical milestone next month — the declaration of the first US Marine Corps F-35 unit, VFMA-121, operational and combat ready at its home base in Yuma, AZ. The squadron recently deployed at sea for its first operational test (OT-1), on USS Wasp (LHD-1). Taking part in the test were four of the ten aircraft operating with VFMA-121 and two from VFMA-501, from Beaufort, SC. Along with 120 marines and technicians deployed at sea for two weeks, they conducted 100 flight missions with the new F-35B Short Take Off, Vertical Landing (STOVL) aircraft.

The deployment evaluated the operational and logistic footprint of a full detachment of six F-35Bs at sea, aboard U.S. Navy amphibious ships. During OT-1 the Marines safely conducted 100 F-35B takeoffs and landings during day and night for extended range operations, and confirmed the reliability of the Block 2B software configuration. The test also evaluated the inter-operability of aircraft-to-ship network communications and trained officers handling the aircraft on board and technicians providing maintenance activities and weapons loading and offloading.

The next milestone in the Marine Corps’ F-35B program is the initial operating capability (IOC), scheduled to take place this summer, following the final operational readiness inspection (ORI) in July.

“As the Marine Corps supports the President’s strategy to rebalance in the Pacific, we’re bringing the most advanced technologies and capabilities of our force to the region with the F-35. The continued development and fielding of the Short Take Off, Vertical Landing Lightning II remains the centerpiece of this effort,” U.S. Marine Corps Deputy Commandant for Aviation Lieutenant General Jon Davis said.

The first deployment is scheduled to take place in 2017, when VMFA-121 will deploy to Iwakuni, Japan. According to the current Marine Corps Aviation Plan, the F-35 is slated to replace completely the EA-6B Prowler by 2019, and the AV-8B Harrier by 2026. The Legacy F/A-18 Hornet will follow, with a scheduled sundown in 2030.

Also in 2017 Israel will become the first international operator of the F-35A, when its first squadron is scheduled to become operational at the Israel Air Force (IAF) Nevatim Airbase. The first two F-35As are expected to land in Israel in December 2016. Other international air forces are scheduled to receive F-15s before Israel, but these are to remain in the USA for training. Israel has opted to train its pilots and technicians at home, and to deploy the new aircraft in Israel as soon as possible.

Israel has ordered two squadrons of conventional F-35As, but future orders could also include F-35Bs, given the Israeli concern of its air bases being targeted by ballistic missiles with precision attack capabilities.

Norway will be the third country beginning F-35 operations that year, along with the first deliveries to Japan and Israel. Norway has funded the procurement of 22 F-35s, from the 52 it plans to operate. Japan will receive 42 of these jets, Israel has committed to buy 33 of the planes.

The delivery of F-35Bs to the Royal Air Force (RAF), scheduled to begin operations with No. 617 Squadron from RAF Marham in Norfolk, is expected to take place by 2018. The Royal Air Force and Royal Navy plan to operate 138 F-35B STOVL aircraft. The British F-35s are expected to fly from Queen Elizabeth-Class aircraft carriers. By 2020 two US Air Force F-35A squadrons will also be based permanently in the UK, at RAF Lakenheath.

“Our Queen Elizabeth-Class carriers are the largest and most powerful warships ever built in the U.K.,” said Mathieson. “They are capable of the widest range of roles, from defense diplomacy and humanitarian assistance to full combat operations, providing flexibility and choice throughout their 50-year life.”

According to Mathieson the unique, low observable nature of the F-35 will allow strike forces deployed from the new carriers unprecedented access to very-high-threat environments, allowing the U.K. to conduct operations across the full range of operational scenarios, day or night, in fair or inclement weather.

The program office anticipates additional orders of +750 aircraft, beyond the +3,000 already received, bringing the total projected production to about 4,000. (The F-16 program produced 4,500 in nearly 4 decades.) This production volume exceeds any other aircraft currently in production or planning. Right now all customers get identical aircraft – either F-35As or F-35Bs (STOVL).

These two models will replace nine different types and models of 4th Generation fighters. F-35 development has been proceeding since 2001, and it is the most tested aircraft in history. Air forces are expected to operate the F-35s for the next 30 to 40 years. Therefore, when the thousands of F-35s are deployed, they will constitute a huge market for sustainment and support.

Air Force Lt. Gen. Christopher Bogdan, F-35 Program Executive Officer, says he is targeting at least 150 F-35s for each of those Block Buy years, for a cumulative total of more than 450 U.S. and export aircraft.

As the F-35 reaches higher production rates toward the end of the Low Rate Initial Production Phase, the US is pressing international partners and foreign customers to commit to F-35 orders. To be able to benefit from cost reduction, customers must commit to a multi-year block purchase. While the US is prepared to accept such commitments, some of the international partners have not yet decided if or how many of the aircraft they will buy. While export sales represent about 40 percent of production for the next years, Lockheed Martin has firm orders for only 30 of the aircraft, Aviation Week reports.

Under the Block Buy Plan the US and its international partners would place orders for a period of three years – from FY 2018 through 2020, giving prime contractors and suppliers the incentive to invest in cost-reduction products and more leverage in their own purchases. To benefit from the cost savings, customers will have to commit to the program by 2016. Those who do not take part in this block purchase will encounter cost increases.