The Centaur optionally piloted aircraft (OPA) has flown multiple unmanned flights over the State of New York, operating from Griffiss International Airport in Rome, New York during the past month. The flights marked the first time any large-scale, fixed-wing aircraft has flown at either of six FAA-designated unmanned aircraft test sites in the U.S.

The successful test flights were conducted in full cooperation and compliance with Oneida County’s Griffiss UAS Test Site, which is managed by Northeast UAS Airspace Integration Research Alliance (NUAIR). Flying unmanned aircraft in the US has been limited by FAA regulations on the integration of UAS in civilian airspace, as flights of military and commercial drones are limited to military-controlled areas and certain areas that were approved for research, testing and specific commercial applications last year.

“Having Centaur lead the way in the U.S. as the first large aircraft to fly in one of the FAA-approved test sites is an important milestone for our company, Griffiss, and the FAA,” said Dr. John S. Langford, Chairman and CEO of Aurora. “This aircraft is coming into high demand from a range of customers, both military and commercial interests, in the U.S. and abroad. The flights conducted at the Griffiss site enable our company to offer these customers an aircraft that has been at the leading edge of efforts to integrate unmanned aircraft into the U.S. national airspace.”

Aurora’s Centaur OPA is based on the Austrian Diamond DA42 aircraft, configured for manned and unmanned flight. The manned flight option enables access to airports worldwide, without the need for large transport aircraft. Conversion to the unmanned flight mode can be done in a few hours, preparing the aircraft for extended airborne missions supporting clandestine operations and low-profile Intelligence, Surveillance and Reconnaissance (ISR) missions. A wide range of payloads is available to support numerous commercial and military applications. The Centaur has been operating in Switzerland since 2012, testing sensors destined for the future Hermes 900 UAV systems.

Designed as a general aviation aircraft, the four-seat DA42 Twin Star is also used as a manned platform by a number of users worldwide, equipped with dedicated sensor packs for ISR, COMINT and geographical surveying.

In addition, a fully-unmanned version of the DA42, called ‘Dominator XP,’ was developed under a joint program between Aeronautics and Diamond Aircraft. In 2012 the Dominator XP began flying in Canada from Alma, Quebec, under Project Miskam, undertaken by CAE and Aeronautics to demonstrate commercial applications of UAS, in support of missions such as remote inspection of pipelines and hydroelectric installations, surveillance of forest fires, observation of critical natural resources, assessment of natural disasters etc.

According to Langford, Global interest in the Centaur has increased dramatically in recent months, and “a number of customers have expressed interest in the one-two punch of combining Centaur’s medium altitude, long-endurance capability with unique expertise acquired on other Aurora unmanned aircraft programs,” he said. Built for very long endurance missions, Aurora’s Orion UAS set the world record for unmanned aircraft endurance, with an 80-hour flight performed in December 2014. 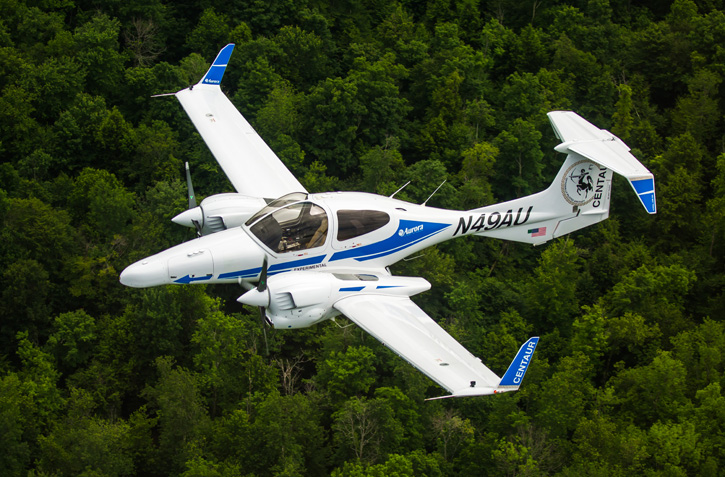