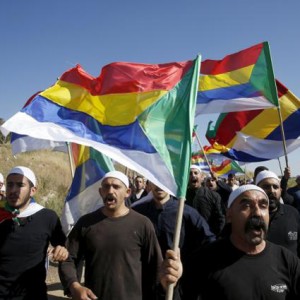 Tensions have been high in Israel’s north since many of the Druze have family who are at high risk from Islamic extremists fighting in Syria. On Monday (June 20) morning, a military ambulance carrying wounded Syrians to treatment in an Israeli hospital, was pelted with stones while leaving the Druze town of Hurfeish – a town that is relatively deep inside Israeli territory in the upper Galilee and whose residents, unlike those of Majdal Shams, serve in the IDF.

Israel regularly allows wounded Syrian civilians and even some fighters for treatment in its hospitals. The IDF has denied claims that it assists Nusra Front, or any of the rebel forces fighting in Syria. But the Druze nevertheless condemn Israel’s humanitarian efforts as helping what they regard, the enemy. If the Druze pressure rises further, Israel may have little choice but to intervene, some way in Syria to help the distressed Druze community if this finds itself facing a real emergency. This should place its leadership, first and foremost the IDF in a serious dilemma.

Throughout Syria’s civil war, Israel has, so far contended with stray mortar fire across its border but now it faces a new spillover, with internal sectarian violence and regional loyalties threatening to drag it into the conflict. After four years of keeping to the sidelines, Israel’s position is becoming more precarious, particularly as it relates to the Druze community, a threatened people inside Syria and a vocal one across Israel’s northern border on the Golan Heights.

The Druze are a religious group who live as minorities across much of the region, with the biggest communities living in Syria and Lebanon. In this patchwork, Israel effectively houses two Druze populations. It has around 110,000 Druze citizens who identify completely as Israelis, serve in the IDF and have also risen to prominent ranks in the security and government positions. A further 20,000 Druze live on the Israeli annexed Golan Heights, land captured from Syria in the 1967 war.

The Druze religion arose from Ismailism, a branch of Shia Islam, in the 11th Century. It takes its name from Mohammed bin Ismail al-Darazi, a mystic from Central Asia who regarded the third Fatamid caliph of Egypt, al-Hakim, as an incarnation of God. In 1021, al-Hakim disappeared under mysterious circumstances. Druze believe that he will reappear at the end of time to establish universal justice. To avoid persecution, Druze have been secretive about their religion. Al-Hakim’s successor, al-Zahir, rejected his claim of divinity and persecuted the Druze, forcing them to take refuge in remote mountainous areas, chiefly in Lebanon and Syria. Only a small number who demonstrate extreme piety and devotion are allowed to participate fully in rituals and have access to scriptures.

Today, Druze make up about 3% of Syria’s population of 22.5 million. Most live in the rugged Jabal al-Druze region of Suweida province, south of the capital Damascus. There are also several Druze villages elsewhere in Syria, including the Jabal al-Summaq region of Idlib – the location of last week’s shooting. And although Druze have played prominent roles in shaping the region’s history, they have traditionally been considered political quietists.

The Islamic State of Iraq and al-Sham (ISIS) is not the only Salafi-Jihadist threatening the Syrian Druze population. Its prominence in U.S. policy has overshadowed a threat of similar magnitude from Jabhat al-Nusra (JN), the official al-Qaeda (AQ) affiliate in Syria. The two groups share common goals, including a revived Islamic Caliphate. JN, however, is pursuing its aims through a distinct, somewhat more patient methodology that is highly dangerous, despite its low signature.

The Syrian war has proven that neutrality has no place in a region inflamed by various forms of extremism. The flames of the war have reached the countryside of a major township of Suwayda, close to the Jordanian border, where Bedouin supporters of Jabhat al-Nusra are attacking the Druze regions of the town of Dama and the village of Shaniya.

According to media reports and local sources, the clashes have led to the deaths of 12-16 people. The Druze — who constitute the bulk of Suwayda’s population — have attempted to remain neutral in the region’s conflicts. Since the Druze sect is one of the region’s minority groups, Lebanese Druze feel a special empathy with their coreligionists in Syria and fear for their fate. The Druze are well known for their solidarity in times of adversity. Therefore, what happens in Jabal al-Arab is seen as an existential threat to the Druze sect as a whole, though some consider it a strictly Syrian concern.

Many wonder if the Lebanese Druze will follow in the footsteps of other Lebanese groups, like Hezbollah and intervene in Syria in defense of their coreligionists. As a minority, Druze have had to negotiate centuries of conflict in the region. Once more, these days, they are being forced to pick a side and potentially decide their fate.