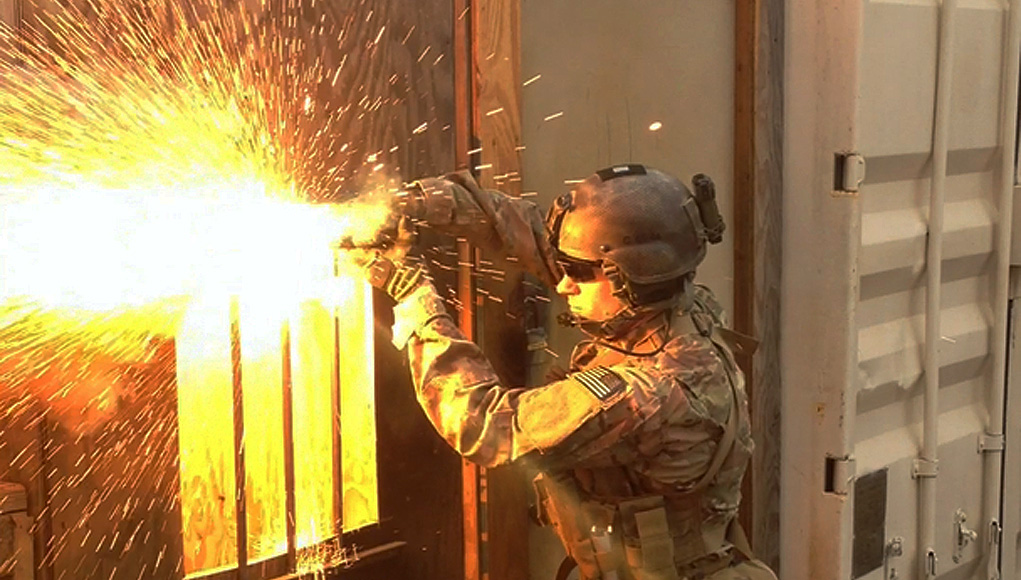 Special operations forces (SOF) operating in war-zone environments are not regularly welcomed with open arms by their adversaries. In fact, their adversaries provide a variety of obstacles designed to keep them at arm’s length. As a result, SOF personnel requested a compact, lightweight, hand-held tool that would allow them to cut through locks, bars and other barriers.

The energetic materials specialist EMPI answered the call, with the introduction of TEC Torch – a small, hand-held thermal erosive cutting (TEC) torch that can cut through steel bars in two seconds. Current systems require large oxygen tanks, hoses and separate ignition systems. The TEC torch uses a reusable handle and a disposable cartridge. The combined unit weighs one pound (0.45 kg.) and measures 13 inches (33 cm.) in length, and 1.5 inches (38.1 mm.) in diameter. The device can be used for breaching, forced entry and in rescue operations, as well as for the neutralization of explosive devices (EOD-UXO) and thermal destruction of objects and systems on land and underwater.

The torch operates by feeding combustion products jet through an engineered nozzle for approximately 2 seconds. The escaping jet is a combination of vaporized metal and particulate which quickly heats the target above its melting point and erodes the target material away. Cartridges contain a unique thermite formulation to achieve maximum temperature and velocity for optimized cutting performance. The cutting jet burns hotter than 4000°F. Cartridges are designed to contain this intense pressure and thermal energy safely within inches of the operator’s hand.

The rod cutter is designed to be fast, cutting a solid steel rod up to 0.75 inch (19 mm.) of hardened, plain carbon, or stainless, in two seconds. The Plate Penetrator cartridge can create a 0.35 inch- (8.9 mm.)-diameter hole through a 0.50 inch (12.7 mm.) steel plate. These two cartridge designs can be used in combination and rapid succession to defeat numerous obstacles.

The device is a thermite-based, high-temperature and high-velocity metal-vapor jet developed by EMPI during the years 2011 to 2013, under a US Air Force Micro-scale Ordnance Technology SBIR. The technology demonstrated the ability to focus an extremely high thermal energy flux into a prescribed pattern using a graphite nozzle with different geometries. This allowed the hot stream to exit in a variety of configurations, including a flat blade for cutting through rods or a round jet for penetrating plates. The objective of the current (third) Phase is to ensure manufacturability and quality control of the TEC torch technology, increasing its production rate from dozens to a thousand units per day.

According to Dr. Stephanie Johnson, an AFRL researcher involved in the project, the technology has attracted interest from a diverse set of users for several applications. “Other applications for the device include a version for miniature robots and for remote cutting operations for the oil exploration or production industry,” Johnson added.

Introduced in 2013, TEC Torch was further developed under the US Air Force Small Business Innovation Research/Small Business Technology Transfer (SBIR/STTR) program office, optimizing the apparatus for use by SOF personnel, law enforcement and first responders. “EMPI has already provided over 600 hand-held units to SOF and to local and federal law enforcement agencies for determining reliability, performance and safety, and several of these units have been used in demonstration for SOF and law enforcement customers,” said Dennis Wilson, EMPI’s SBIR principal investigator. “Their feedback has been incorporated into making design changes, such as handle length and safety modifications.”

The company is also developing scaled-up cartridges designed for heavy rod cutting up to 2 inch (50.8 mm) diameter and plates to 1.25 inch (31.7 mm) thickness.

Since fuel and oxidizer components are fully contained inside a sealed cartridge body, the torch effectively operates underwater. Testing are currently underway to characterize the performance and safety of the devices at depths up to 40 meter.