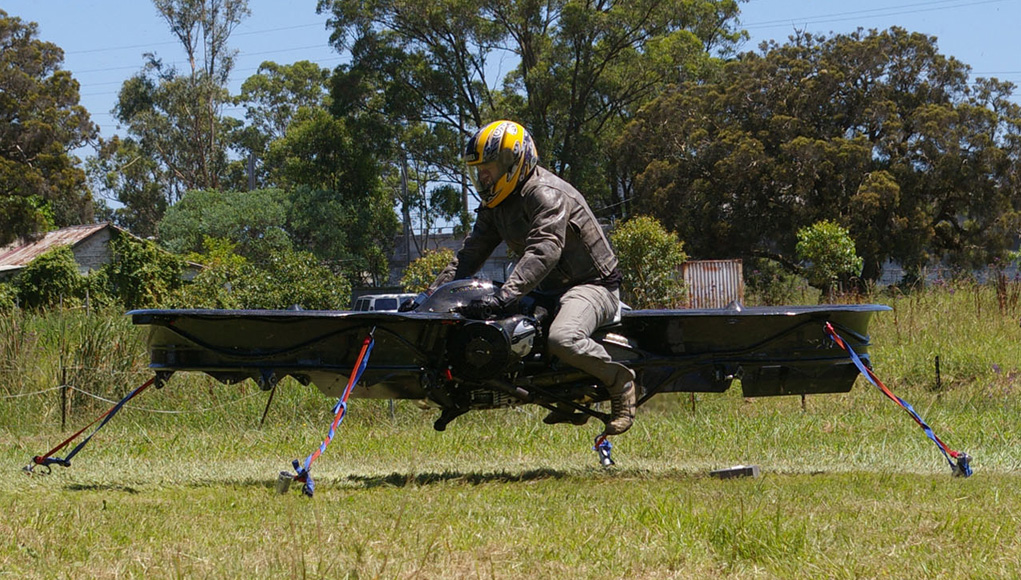 The U.S. Army Research Laboratory (ARL) has been exploring the tactical reconnaissance vehicle (TRV) concept for nearly nine months and is evaluating the hoverbike technology as a way to get Soldiers away from ground threats by giving them a 3-D mobility capability. The Army considers this disruptive technology for its potential to increase Soldier protection at the squad level and below.

The feasibility study of the technology recently concluded, and indicates successful performance. During the next three to five years, ARL, a part of the U.S. Army Research, Development and Engineering Command (RDECOM) will partner with Malloy Aeronautics, a United Kingdom-based aeronautical engineering company, and SURVICE Engineering Company, a Maryland-based defense firm, to deliver full-sized prototypes and analysis for evaluations and assessments in military applications.

The TRV concept could unburden Soldiers while increasing their capabilities regardless of the environmental conditions, in manned and/or unmanned operations. Besides mitigating the dangers of ground threats, capabilities for the TRV concept could include aiding in communication, reconnaissance, and protection; sensing danger or even lightening the Soldiers’ load.

The company founder Chris Malloy launched the Hoverbike in New Zealand, and later moved to Australia, before establishing Malloy Aeronautics in the UK last year. Stepping up development, Malloy turned to crowd funding in February 2014 to help raise additional money to complete the development of this innovative concept.

The company is developing two product lines – the Drone 3 quadcopter, a quadrotor mini-drone that can be folded for carriage, and the larger HoverBike, configured in unmanned or manned variants. The company has recently flown the second-generation Hoverbike prototype, a larger aerial vehicle that is capable of lifting a person of at least 100kg. However, for safety and legal reasons the platform is currently being tested only as a drone.

A two-rotor prototype has also made tethered flights and Malloy plans to scale up the design to support a platform that can haul up to 800 pounds.