Weapons specialists at the US Naval Air Warfare Center Weapons Division (NAWCWD) at China Lake, CA. have recently tested the capability of guided missile to defeat an unmanned aerial vehicle in flight. The Spike miniature, lightweight precision guided missile was used for the test performed in December 2016 at China Lake. Two of the small missiles demonstrated the capability of the Navy designed weapon to shoot down an Outlaw UAV with a single shot. In one engagement, the Spike performed with proximity fuse while the second verified contact activation with a direct hit.

To prepare for the demonstration the Spike launcher was mounted to a radar-queued gimbal, which maintained the target in the missile’s field of view while the Spike operator acquired, tracked and engaged the target.

Preparing for a counter-UAV live fire exercise in 2013 the Spike project team collaborated with the U.S. Army’s Armament Research, Development and Engineering Center. Following that 2013 demonstration, ARDEC requested the Spike team’s participation in a transport convoy protection line of defense using a similar gimbal system. The Army provided a proximity fuse for integration into the missile and the incorporation of that fuse enabled the Spike missile to explode on contact or near the target. In December, the Spike team demonstrated the effectiveness of both activation modes, destroying two Outlaw UAVs.

Project engineers continue to make improvements to their fire control suite, processes for safer assembly as well as algorithm updates for better endgame performance and replacement verification tests that are cheaper, faster and equally as effective as the previous ones.

Known as the forward-firing miniature munition, Spike is under development by a small team of engineers at China Lake, seeking to provide a cost-effective weapon that could counter emerging threats with capabilities that other weapons cannot. One such area is the increasing threat of small boat swarms often referred to as the fast attack craft (FAC) and fast inshore attack craft (FIAC) threat. One strategy the enemy employs is to use multiple FACs/FIACs to go after a target. The Spike could be a good gap-filler in a layered defense against this tactic. Spike has recorded direct hits against moving FIAC threats in separate test events on the NAWCWD Point Mugu sea range. 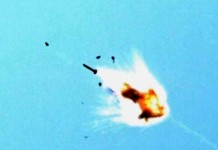