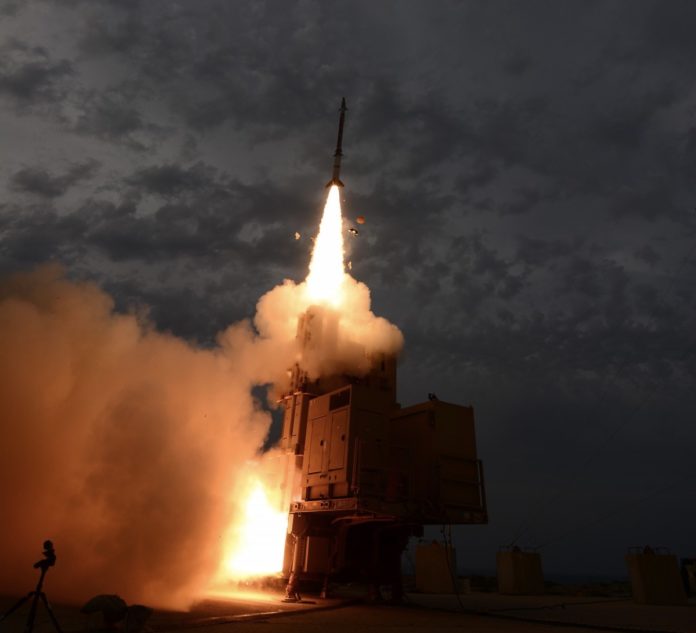 Israel’s Missile Defense Organization (IMDO) within the Israel Ministry of Defense and the U.S. Missile Defense Agency successfully completed a series of intercept tests of Rafael/Raytheon David’s Sling Weapon System (DSWS). The new system is being deployed with Israel’s multi-tiered antimissile array. This is a second milestone announced by the IMDO in recent days. Earlier this month the Israel Air Force took delivery of the first Arrow-3 exoatmospheric interceptor produced by IAI.

The test series designated David’s Sling Test-5 (DST-5) was conducted at ‘Yanat’ Sea Range, operated on the Mediterranean coast south of Tel-Aviv, out of Palmachim Air Base, Israel. It was the fifth series of tests of the David’s Sling Weapon System. The initial block of the system was delivered to the Israel Air Force in late 2015 and the system was undergoing induction and testing since; the IAF is expected to declare the system operational soon. The recent test was part of the system’s ongoing development and not required for the Initial Operational Capability (IOC).

The test examined capabilities and performance of the entire David’s Sling Weapon System. Through these tests, Stunner missiles intercepted threat-representative, highly maneuvering, long-range target at high-altitude. The system’s Multi-Mission Radar (MMR) detected the target after launch and transferred flight information to the Battle Management Center (BMC), which calculated the defense plan. The interceptors were successfully launched, performed all flight phases and engaged the targets as planned. Preliminary analysis indicates that all test objectives were successfully achieved. During the test other systems participated in ‘shadow mode’, testing the integration and mutual support between the systems (editor’s note: David’s Sling and Iron Dome systems share a common radar and are part of Israel’s multi-tiered missile defense system.)

The information collected during the test is being analyzed by program engineers and will be used for ongoing development and fielding of the David’s Sling Weapon System. This test series provides confidence in future Israeli capabilities to defend against large-caliber rockets and other developing threats.

The David’s Sling Weapon System project is a cooperative effort between the United States and Israel to develop a defense against large caliber rockets, short-range ballistic missiles and air breathing threats including cruise missiles. The system will soon be delivered to the IAF. DSWS is designed as an evolving system that will be able to enhance and take on additional threats in the future.

The prime contractor for the David’s Sling Weapon System Program is Rafael Advanced Defense Systems Ltd., with Raytheon Missile Systems as a sub-contractor. The MMR is developed by Elta, a subsidiary of Israel Aerospace Industries. The BMC, known as the Golden Almond, is developed by Elisra, an Elbit subsidiary.