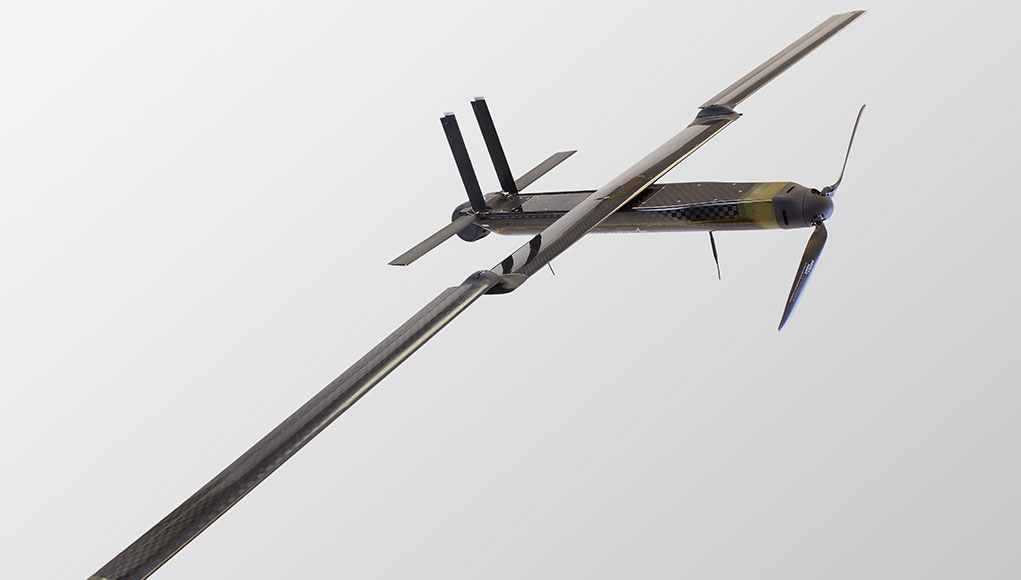 A miniature, expendable drone launched from submarines while underwater at periscope depth was unveiled today by Lockheed Martin UK at the DSEI exhibition. The OUTRIDER is a lightweight, canister launched UAS designed to be used in environments where conventional, larger unmanned air systems are not practical.

At only four inches wide and weighing only 1.7 kilograms, OUTRIDER is small enough to be launched from a NATO standard submarine signal ejector. The drone can also be launched from vehicles or dropped from aircraft and helicopters.

Despite its size, OUTRIDER can travel up to 50 knots and reduces speed to loiter over the target area for an extended endurance of up to 2.5 hours. The key to the drone’s performance is the patented, high aspect ratio folding wing design that maximizes endurance whilst folding into a small package for storage and launch.

OUTRIDER can be operated remotely or has the ability to be autonomous. Thd micro drone carries a small EO payload placed at the tail, taking high-definition TV and infrared imaging. The system currently uses a commercially available controller that is already used with other Lockheed Martin UAS. The system has the capacity to operate multiple OUTRIDERS simultaneously from one controller.

The OUTRIDER was designed by engineers at Lockheed Martin UK’s Havant facility in partnership with Wirth Research, an engineering company with specialization in aerodynamics and composite materials. As a UK developed product OUTRIDER is exempt from the limitations of U.S. International Traffic in Arms Regulations (ITAR). Several customers have already expressed interest in the system. The system has already demonstrated the most complex launch from the underwater canister, successfully deploying the drone using a specially designed buoyant structure and compressed air launch. Similar canister launched systems will be used for vehicular applications while on air-dropped deployments the drone will be dropped down from its storage canister.

“We are proud to offer OUTRIDER which has been designed and built in the UK for the international market. It provides secure leading edge situational awareness capabilities in its class for ground, surface, air or Sub-surface operational environments and can be launched at the press of a button,” said Paul Livingston, vice president and group managing director, Lockheed Martin UK – Integrated Systems.

Advanced ERA, Level 6+ Armor Among the New Survivability Solutions From...