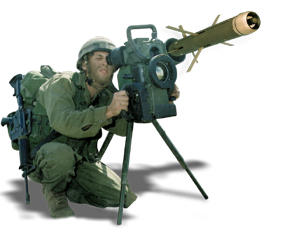 Spike LR (formerly known as Spike) is a lightweight (13.0 kg) Medium range weapon, designed to offer the infantry an effective anti-tank and precision attack capability at ranges from 200 m to 4,000 meters. A system, comprising a missile and launcher weighs 26 kg. A typical Gill anti-tank team include two soldiers, one carrying two missiles and the other – the tripod and fire control unit. Further reduction of weight is enabled by utilizing the missile’s imaging seeker for target acquisition, which eliminate the need for a dedicated thermal sight which weighs 4 kg. However, such a sight improves the target acquisition range of the system, especially at long range. The system can deploy and be ready to fire within 30 seconds. Gill can be reloaded and be ready to fire again within 15 seconds. The missile is safe to operate from enclosed spaces, which is an essential capability for combat from protected firing positions and in urban warfare.

The missile uses a dual mode IIR/CCD seeker to locate the target and lock on it from the maximum operating range. The missile uses a tandem warhead to defeat even the latest advanced armour. Spike LR retains the Spike MR’s “Fire and Forget” capability, but also offers the advantage of “Fire, Observe and Update” operating mode, by the use of fiber-optical link between the launch position and the missile. This capability enable the crew to launch the missile at observed targets, which cannot be seen from the firing position, such as targets hidden beyond hills and defilade, or behind smoke screen. The missile can be operated by infantry teams, from dismounted launchers, or from standard mounts designed for fast attack vehicles, utility vehicles and APCs.

In 2005 Sagem demonstrated the Spike LR integration with the Sperwer UAV. This was the first example of a weaponized UAV application for “man-in-the-loop” guided missile used from autonomous UAV. (The Hellfire missile used with Predator UAVs are laser homing weapons, seeking targets marked by laser.)

In January 2007 RAFAEL and General Dynamics Santa Barbara of Spain signed contract to supply the Spanish Army with 260 Spike LR systems, and 2,600 missiles.