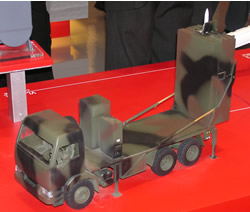 VL Mica is a land based derivative of the naval vertical launch version of the MBDA Missile System Mica air/air missile. The system was developed to provide effective air defense for mobile units, and installations. The system is designed to counter high speed maneuvering targets at all weather, with a mobile, short range fire-and-forget missile.

The Mica air/air missile is a matured system, incorporating both RF (active radar guided) and infrared imaging seekers to ensure autonomous guidance after launch (Lock On After Launch). The vertically launched missile features a thrust vector control system to rapidly turn toward the target after launch. The VL/TV concept enables the system to maintain a short reaction time, and high firing rate (less than 2 seconds between firings), when simultaneously engaging multiple targets from different directions. The launcher can meet such contingency without the need of costly tracking and guidance system, as well as heavy mechanical slewing mechanism.

The system comprises of mobile launch units, each carrying 4 – 6 launchers and a tactical operation center which also links via fiber-optic line to the remote controlled radar, and via VHF radio link, to the firing units. The system has not been deployed yet, but is currently marketed and competing on air defense contracts worldwide. According to MBDA, the French Army and Air Force are also evaluating the new system. Initial firings of the VL Mica were done in December 2001.