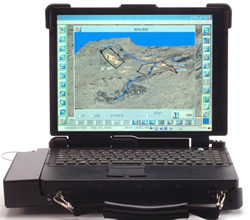 The RAFAEL Tactical C4ISR (RTC) system provides tactical units with independent support for mission planning, navigation, situational awareness and target acquisition and engagement. Employed with mobile and dismounted forces, including Special Forces, the system can also interface with other systems in a wide area to establish large scale networking. The RTC links to standard combat net radios to access the network and transfer data between the network’s units. RTC provides battle management support including target acquisition, allocation and management of all firing assets under the commander’s control, as well as fire management and control of individual firing units such as anti-tank missiles.

This application was formerly known as Spike C4I and was tested with Spike equipped units where it demonstrated how it can simplify the communications between different element in the group, increases the agility and precision of the supported forces, and accelerate the sensor-to-shooter cycle between reconnaissance and assault forces while minimizing the risk from fratricide “friendly fire”. The system can also integrate various sensor platforms including individual sights of the anti-tank weapons, UAVs and other airborne sensors, acoustic sensors and observation posts.