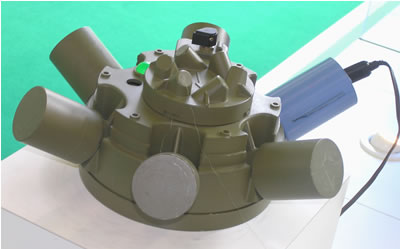 Spider is under development at Textron Systems and ATK under the Objective Force anti-personnel component program. The system is designed to protect friendly forces and shape the battlefield while minimizing risk to friendly troops and non-combatants. In January 2005 the US Army decided to accelerate fielding of the Matrix remote munitions control system, which is a lead-in version to the Spider. The Army awarded ATK Twenty-five Matrix systems to be delivered to U.S. forces and deployed in Iraq by June 2005. Matrix is a portable, reusable, soldier-in-the-loop system that can be used in either a lethal, or a non-lethal mode. The program is managed by Project Manager Close Combat Systems and the U.S. Army Armaments, Research, Development and Engineering Center (ARDEC).

The Spider’s Munition Control Unit (MCU) is a pedestal fitted with six munitions launchers each covering a sector of 60 degrees, and a communications module which links the Spider with its remote operator. The MCU communicates with the Remote Control Unit (RCU) by direct wireless link, or via field communications repeaters. On operator command, the Spider autonomously deploys trip wires corresponding to each sector. When a trip wire is activated, a signal is sent from the sensing MCU to the Remote Control Unit (RCU).

Based on that signal, the operator’s own observation of the field, and other situational awareness and guidance from the chain of command, the operator can direct the detonation of the grenades associated with the trip wire detection. The operator may delay this action, to allow more intruders to penetrate further into the kill-zone and deploy multiple charges for maximum effect. Munitions include self-activated grenades, operator activated claymores or various non-lethal munitions. The MCU is powered by a replaceable battery and can sustain continuous operation for 30 days. The system can be recovered and replenished with new grenades after an engagement. The Spider can be deactivated on command, to enable safe recovery or passage of friendly forces. The RCU uses a rugged laptop computer equipped with a touch screen to provide full control of an area up to 1,500 meters deep. Each RCU enables the monitoring and activation of a single or multiple charges.