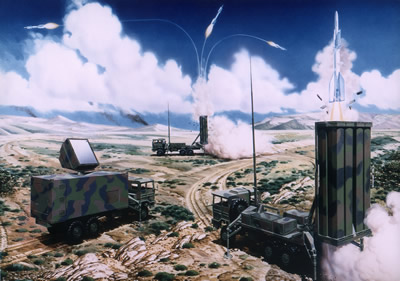 SAMP/T is a land based air defense system incorporating the Aster 30 missile, designed to provide area defense and point defense for land forces and sensitive sites. The missile is effective against emerging threats, including aircraft, UAVs, helicopters and also the new generation of high speed stealthy stand-off missiles. Aster is a modular family of vertically launched air defense missiles, designed initially for naval use.

The missiles were developed by MBDA for the Franco – Italian Future Surface-to-Air Family (FASF) program, endorsed by the armed forces of both countries. Under the SAMP/T medium range area defense system, both armies, as well as the French Air Force, are expected to field the Aster 30, covering the range of 120km. Evolved Block 1 version of Aster 30 also includes missile engagement capability, intercepting Tactical Ballistic Missile of the 600 km class. MBDA is also planning to offer Aster 30 Block 2 missiles in the future, with engagement capability of ballistic missiles with much longer range.

Thales is responsible for the Arabel fire control system. The Arabel multifunction, electronic scanning radar which already equips the French Navy Charles de Gaulle aircraft carrier, is capable of detecting all types of threat in the harshest environments and provides high-precision guidance in the missile’s initial phase, until the onboard seeker takes over and guides the missile onto its target. The system’s ability to counter ballistic threats will be made possible by the later addition of a multi-function air defense radar incorporating the new M3R technology.

The firing units comprise of truck mounted firing units, equipped with vertical launcher. Each army will use local trucks for its systems – the Italians will use Astra/Iveco and the French – the Renault TRM-1000 trucks. Each firing unit will be able to fire eight missiles in rapid succession to counter saturation attacks. The system is in development since 1997. Two systems were produced under Phase 2 contract, one for each country. Qualification tests were carried out at the end or 2003 and followed by Phase 3 contracts, covering Block 1 missiles was signed in November 2003, including 12 systems for the French Air Force and Army and six for Italy. MBDA is also offering SAMP/T system for export.