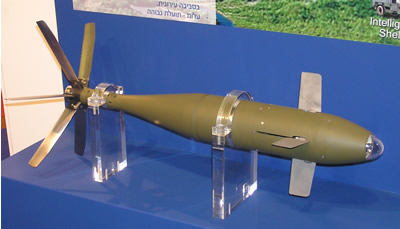 Developed By IAI/MBT, the Fireball is a laser homing 120/121mm mortar bomb, (the system also fits into a 81mm mortar bomb diameter). It is designed for first-shot, first hit capability and can be used with rifled or smooth bore tubes.

Firing the Fireball requires no ranging, as the weapon uses a unique guidance method that provides course adjustment by gliding, extending range capability. The bomb to detects the target as it glides to the laser detection “basket”, by GPS navigation, where it acquires the target and diving for the kill. The target’s GPS location is fed to the bomb before launch and provides for improved hit accuracy over standard mortar bombs, when laser designation is not available. With laser designation, the bomb can reach an accuracy of 1 meter CEP or less, attacking stationary or moving targets. Fireball uses various warhead fusing options – fragmentation, against soft targets, percussion against armor and penetration type for defeating bunkers and targets inside buildings. The weapon is designed to score a single-shot target kill in urban environment, utilizing a steep trajectory minimizing collateral damage. Due to the unique aerodynamic design, Fireball has almost twice the range of conventional mortar bombs, (up to 15 km).

The system is currently in development stage. All its critical components have already been tested under high G loading and actual mortar firing. further system tests are planned soon. A variant of the Fireball is also considered for tube artillery (152, 155mm).