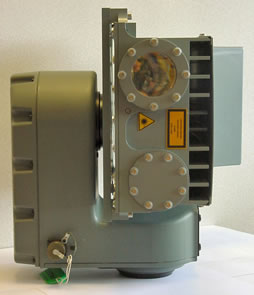 DHY 322, laser countermeasure system, first introduced by CILAS in late 2005 is designed to protect high value fixed and deployable targets such as command posts and naval vessels from laser guided weapon attacks. When a hostile laser designator is aimed at the protected target, DY 322 generates a deceptive spot, by illuminating a high power laser spot near the actual target, coded to mimic the hostile laser signal, thus deceiving the attacker to lock on the new spot instead of the targeted object. The system is already operational on warships.

DHY 322 is able to counter any laser guided weapon attack in less than one second, much faster than alternative countermeasures systems such as smoke system or guns. DHY 322 is efficient even against the latest generation of laser guided weapons which needs only few seconds illumination duration. The DHY 322 countermeasures system uses a combination of one or several powerful lasers turrets. Fully automatic and multidirectional, this system works 24 hours a day for a full protection of the sensitive area.