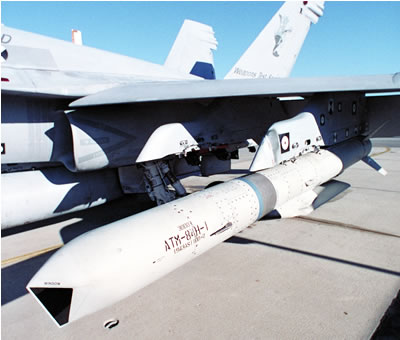 SLAM is a spin-off from the radar-guided air-launched Harpoon anti-ship missile. The SLAM-ER is an upgrade of the original missile. SLAM-ER uses GPS midcourse and IR terminal guidance to strike at surface targets with high precision. The missile is offered as a new production or retrofit kits for existing SLAM missiles which are operational with the US Navy since 1988. SLAM ER entered US Navy service in 2000. The retrofit upgrades include planar wings to improve range and aerodynamic performance; an improved warhead to increase penetration and lethality against hardened targets; and software improvements making it easier for the control aircraft to select the precise hit-point on the target. The missile is equipped with a 500 pound derivative of the Tomahawk Block III warhead developed by the Naval Air Warfare Center Weapons Division, China Lake, Calif. The WDU-40/B warhead uses a titanium case shaped specifically to increase penetration and becomes reactive during detonation, substantially increasing the blast and incendiary effects. 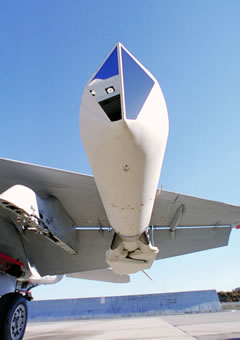 SLAM ER achieved an early operational capability in the summer of 1999 and is currently deployed on several aircraft carriers with F/A-18, P-3 and S-3 aircraft. Boeing is currently under contract with the U.S. Navy to produce 346 SLAM-ERs, beyond 2004. Approximately 700 SLAM missiles in the U.S. Navy arsenal will be retrofitted with the SLAM-ER upgrade. South Korea will buy SLAM-ER under a $70 million contract, for its new F-15K multi-role fighter aircraft.

SLAM-ER provides surgical strike capability against high-value, fixed land targets, ships in port, or at sea. Designed for deployment from carrier-based and land-based aircraft, SLAM-ER can also be adapted for ship launch. The missiles is launched from a distance beyond 150 nautical miles, and flies a subsonic flight, navigating by INS/GPS navigation system. The missile can also receive in-flight target position updates on its midcourse flight, to enable effective engagement of moving targets such as surface ships at sea. Several miles from the target, on the terminal phase of the flight, the SLAM-ER activates its imaging infrared sensor. Images are processed by the Automatic Target Acquisition (ATA) processor. The missile’s image processor use pattern-matching algorithms to compare the target scene with on-board reference images to automatically locate the pre-planned aimpoint in the target scene. The Weapon System Operator or pilot can then designate a specific aimpoint to be attacked, or verify the decision taken by the missile. To provide faster, clear image transfer over narrow-band datalink, the system utilizes a special Stop Motion Aimpoint Update which can be viewed on the F/A-18 multifunction display console in the launch aircraft or any other aircraft equipped with compatible datalink, to provide near-real time battle damage assessment.

One of the unique features introduced with the SLAM ER software modifications update was In-Flight Flex-Targeting capability which enables effective retargeting of the missile after launch. In Operation Iraqi Freedom, SLAM-ER’s video link provided valuable bomb damage assessment to the mission planners. SLAM-ER pilots not only identified the true locations, they re-targeted the missiles using aimpoint refinement alone to hit those targets. This capability is facilitated by using streaming midcourse updates from F/A-18 Multifunctional Information Distribution System (MIDS) using existing network rates and targeting sources, such as JSTARS and UAVs.

SLAM ER’s anti-ship performance is critical for achieving dominant control in the littorals. The littoral, defined as the waterways 100 miles off the coastline and 50 miles inland, is one of the U.S. Navy’s most complex and challenging environments in which to operate effectively. Future joint military operations are based on the U.S. Navy’s fundamental and dominant control of the littorals, which are typified by areas of heavily trafficked commercial sea-lanes, shallow depths and irregular landmasses such as inlets, rivers, islands and harbors. Dominance of this area is essential to providing protected access to the theater for arriving forces, seizing or establishing shore bases and providing command and control for immediate operations.