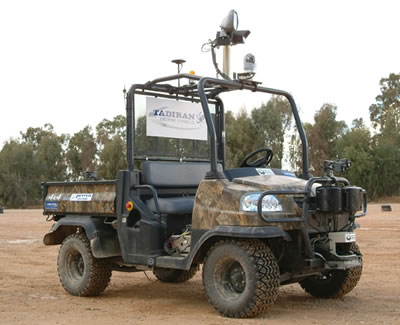 Tadiran Electronics Systems and Autonomous Solutions Inc. (ASI) are developing an autonomous unmanned ground vehicle (AUGV) configured for as reconnaissance, surveillance and perimeter security missions. The vehicle can be used in an autonomous or tele-operated modes of operation using automatic obstacle avoidance by use of advanced sensors such as 3D laser radar (LADAR) and stabilized video cameras. The vehicle can move along a pre-programmed path designated by GPS waypoints, or by autonomously repeating manually driven paths. Multiple video feeds and sensor data are relayed back to the portable, forward operator or the control center via line-of-sight digital communications link. The vehicle can also operate over extended range, with special adaptations.

Spotter, developed under cooperation between Tadiran, member of Elbit Systems group and US based ASI, is based on an All Terrain Vehicle chassis, designed for traveling on paved roads as well as off-road missions, and it can go through rough terrain that manned vehicles cannot normally traverse. The Spotter was recently demonstrated to IDF senior officers and potential users. ASI. has already sold robotic systems to the Israeli government. According to ASI press release, six Spector under-vehicle inspection robots were delivered to the Israeli Police in February this year. Similar systems called UVIS are already used by the US military in Iraq. 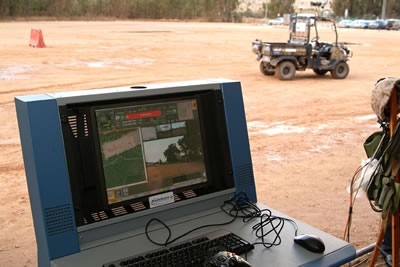