The US Army is testing several versions of HED powered AM General Humvee. Some are configures similar toi commercial hybrid vehicles, while others feature more advanced ‘electrical propulsion’ capability.

Hybrid Humvees recently went through field testing with the 101st Airborne Division (Air Assault) at Ft. Campbell, Ky. where they were using hybrid (diesel and electrical) power in convoy movements and driven in “stealth” mode on battery power only, for distances of 10km. Further testing is planned for November 2005 at Ft. Benning, Ga, as part of the Air Assault Expeditionary Force Experiment. While no procurement plans are in place yet, when matured, the US Army could use between 5,000 to 20,000 HED Humvees, used for tactical support applications such as command vehicles, air-defense and artillery.

The vehicle uses a 2.2 liter diesel engine and a 75kW brushless DC generator to provide electric power for the wheel drive motors. The vehicle can also generate 10kW clean power from the battery. With engine on, up to 75kW continuous power can be provided, with peaks of up to 250kW.

Two versions of HED are tested with the Humvee – with a four-motor drive and a two axel drive configurations. The four-motor configuration provides the highest possible performance, and excellent cross-country mobility, especially in sand and mud, because it enables the wheels to maintain optimal traction when the wheels are controlled individually, rather than going through a mechanical differential. The utility version uses two electrical motors powering the front and rear axels. This vehicle has better performance compared to a standard Humvee but not as good as the four-motor version. Some of the HED Humvees were built by DRS Technologies, using UQM Technologies permanent magnet motor/generator. A single 100kw generator is spun by the vehicle’s diesel engine and providing electric power to both propel the hybrid electric vehicle as well as to meet on-board stationary electric power requirements. The vehicle also incorporates two 100Kw UQM propulsion motors, one per axle. On-board electrical generation capacity is sufficient to power all electrically based weapons, as well as operate adjacent facilities such as field hospitals, telecommunications centers, auxiliary radar equipment etc. This design has demonstrated fuel efficiency improvement in excess of 30%, depending on the vehicle driving cycle.

The four-motor Humvee can accelerate from 0 to 50 miles per hour in 7 seconds, compared to 15 to 16 seconds in a standard Humvee. A conventional Humvee can achieve a 60-percent grade at a speed of about 5.5 miles per hour, while the hybrid can take it at 17 miles per hour. A standard Humvee gets eight miles per gallon driving on hard surface roads at convoy speeds, a hybrid vehicle would get up to 16 miles per gallon. For quiet operations, the vehicle can operate with electric power only. It can run 20 to 25 miles on electric power before it has to be recharged. The 24 kilowatt-hour lead-acid battery pack delivers enough power for driving 20 to 25 mile distance.
When matured, HED will be provided as a “plug-in kit” for standard Humvees, installed by the manufacturer on in Army depots. While the Army cancelled funding for HED Humvees production qualifications in fiscal years 2005 and 2006, the existing vehicles continue testing and evaluation by several US Army units. 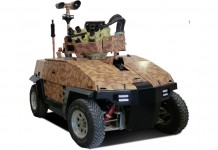