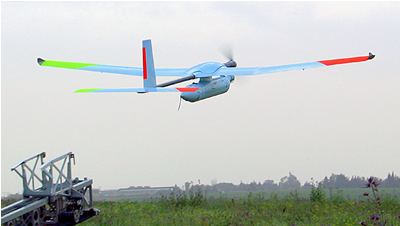 At Eurosatory 2006 Elbit Systems unveiled its latest Skylark II Small UAV system, designed to fly covert missions at low to medium altitude, in day, night, and under low clouds, when other observations systems are not operable due to limited visibility. The system is designed for operation at battalion level. Skylark II will be self contained in an all-terrain vehicle such as the Humvee, equipped with launching rail, storage for two aerial vehicles, mission control stations, communications and datalinks. It can be operated by a crew of two. The system retains the compact ground station and datalink of the Skylark Mini uav.

Skylark II is an outgrowth of the Skylark mini-UAV system, currently operational with several armies. The 35 kg GTOW vehicle has a wingspan of 4.2 meter. It is designed to carry 6 hour missions at ranges up to 50km. The vehicle is powered by a new 4 kilowatt electrical motor, developed by Bental Industries, and driven by a battery pack contained in the payload pod underneath the main boom. The propulsion system is comprised of a dual-channel Permanent Magnet Brushless Motor and a Driver/Controller. The system delivers up to 4 kW during takeoff and climbing stages of the mission, but during cruising, when less power is needed, the driver switches one channel off, to save power, enabling extended vehicle endurance. This tandem design introduces propulsion system redundancy even with a single motor. In case of failure in on of the two systems, the control will automatically switch to the other system. This enables the mission control either continue the mission or cancel the mission and return to base safely.

The new vehicle utilizes a similar design and is constructed of the same materials as its smaller brother. It will be equipped with a new, 8″ stabilized lightweight EO/IR multi-sensor payload carrying color CCD, 3rd generation (3-5 micron) thermal imager with three fields of view, a laser illuminator and an optional laser designator.