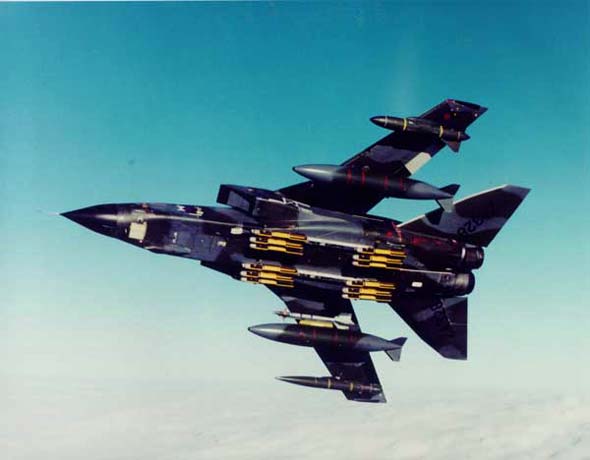 Brimstone advanced anti-armor, air-to-surface missile is a Hellfire Longbow derivative, designed for use by the British forces. Offering all-weather “fire and forget” capability, Brimstone is optimized for both fast jets and attack helicopters. The millimeter-wave seeker autonomously detects, recognizes and tracks targets in daylight or at night and is unaffected by adverse weather conditions, countermeasures, smoke, dust, fog, clouds or sandstorms. The Brimstone system comprises three missiles each weighing 50 kg. The missiles are carried under a triple-rail launcher designed for high speed aircraft. The system is integrated on Harrier GR9, Tornado GR4 and Typhoon aircraft. Brimstone is scheduled to enter RAF service in 2004.

Brimstone can be employed in direct or indirect attack modes. In a direct attack mode the pilot visually selects the target prior to weapon’s release, which may be assisted by an on-board target designation system (such as a targeting pod or laser spot tracker). This mode is designed for the attack of targets of opportunity, or self defense against air defense assets. The Indirect Attack Mode uses targeting information provided by a remote platform, such as a UAV, or ground based target designation teams. The target data is fed directly to the missile via datalink, during flight. This mode is particularly useful on close air support missions. When large formation of targets can be engaged, salvo firing of multiple missiles can performed, up to a full platform load.

The missiles can be programmed to fly on separate paths spreading out to cover a large area, or follow a flight corridor, when engaging targets in convoys or marching order. After launch, the missile follows an inertial trajectory up to a certain point where it activates its millimeter-wave radar seeker to acquire and track the target. The radar uses a narrow, high frequency beam for search and track, which maintains low-probability of intercept and rejects much of the ground clutter to provide a clear target signature. Target recognition algorithms are employed to detect and recognize priority targets such as main battle tanks, self propelled guns and air defense vehicles. The missile uses tandem shaped charge warhead designed to defeat all known armored vehicles and ignore civilian vehicles or low value targets.

Development of the Brimstone began in 1996 under UK MOD contract. The latest test firing from Tornado GR4 aircraft were conducted in October 2003 under the RAF Strike Attack Operational Evaluation Unit (SAOEU). The test involved three missiles fired on a single path at T-72 and M60 targets at the US National Air Warfare Center at China Lake. All three missiles scored three hits at different targets. 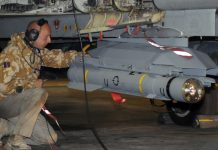