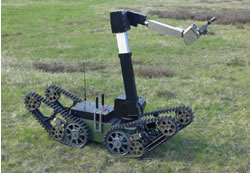 Robotic platforms can serve as an effective substitute for personnel for high-risk or highly fatiguing operations. Unmanned systems create a standoff capability that significantly improves the chances of survival of combat troops, thus widening the operational scope of modern military units. One of the first applications of military robotics was the Explosive Ordnance Disposal (EOD) robot. The design focused on inspection and investigation of suspicious objects, and neutralizing them by disrupting sensitive activation devices, or safely removing them to a safe place. All these activities are performed under continuous human control by experts utilizing the robots as “tele-operated” systems. These are large, and relatively slow robotic platforms used for high risk combat engineering tasks, such as counter IED and counter mine patrols or heavy earthmoving operations in areas saturated by enemy fire.

Military and law enforcement agencies worldwide are already operating different versions of this type of EOD robots. Recent improvements in EOD robotics include faster and more agile platforms, which provide faster movement over obstacles, the ability to climb steps, etc. More sensitive and ergonomically designed controls allow better and more sensitive control of the manipulation devices and sensors providing improved performance. Two examples of this type are the German Teodor and Telemax.

A more ambitious task, which involves a higher level of autonomy, is the sentry mission. Sentry robots carry out routine guard and patrol missions, monitoring restricted areas, detecting and reporting any suspicious movement in the area under surveillance. Unlike a fixed camera or unattended ground sensor, the robotic sentry can be programmed to patrol randomly, and respond to specific triggers by assessing the situation in order to improve response rate and efficiency while reducing the probability of false alarms. As a mobile, intelligent sensor-effectors, robot sentries allow coverage of more area with fewer resources. Types of robotic autonomous sentries include small sensor packed spheres, which can roll into any location over a flat surface, effectively covering indoor spaces such as warehouses, yards or storage area. Larger robots include wheeled or tracked platforms, which mount an array of sensors on an elevated mast. Modified “robotized” all-terrain vehicles such as IAI’s Guardium which was displayed at Eurosatory 06, have also been converted to autonomous patrol vehicles, patrolling along a borderline, secured roads or anti-infiltration perimeter lines. 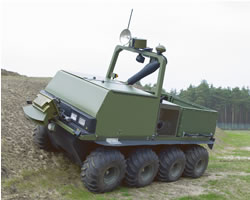