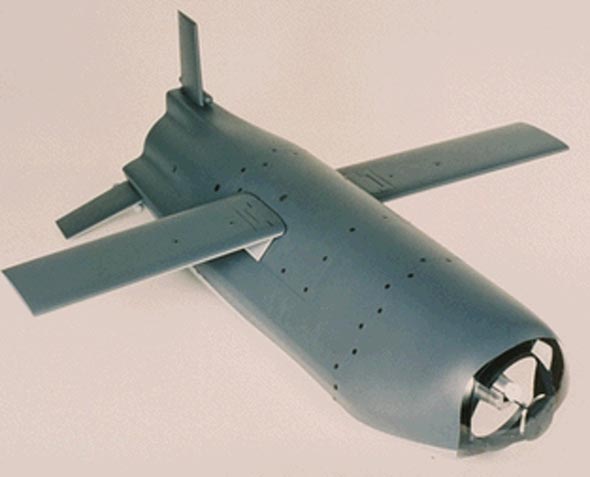 The Low Cost Autonomous Attack System (LOCAAS) is currently in a final system development phase, as part of the US Air Force Wide Area Search Munition Program. LOCAAS is designed as an un-powered or powered, brilliant submunitions. The 36 inch long powered system weighs about 90 pounds, has a miniature 30 pound thrust turbo-jet engine, and a range beyond 100 nautical miles. It is equipped with a laser radar sensor, sophisticated image processing electronics, full authority flight control system and multi-mode warhead.

LOCAAS is designed to attack high priority mobile or relocateable targets, armored or soft targets with high precision. The weapon can loiter at an altitude of 750 feet over the battlefield, flying at a speed of 200 knots for about 30 minutes, covering a footprint of 25 square nautical miles, and take out high-priority targets such as mobile air defenses, mobile surface/surface missile launchers and long range rocket systems. This weapon is particularly useful at the early stages of a conflict, when the exact locations of such targets is unknown and when operations of manned aircraft and unmanned combat aerial vehicles (UCAV) is too dangerous or too costly. LOCAS is equipped with a multimode, explosively-formed penetrator warhead and programmable fuse to engage the target according to its protection level. The warhead can be configured to explode into an armor piercing long rod penetrator, an aerostable slug against softer targets, or as fragments when engage exposed personnel and unprotected targets. The exact aimpoint and warhead mode are automatically determined by the LADAR fire control system.

LOCAAS’ LADAR sensor can be used to guide smart munitions, as well as providing targeting and fire control for associated systems. Prior to the mission, the flight plan and general search area assigned for patrol are uploaded to the weapons. LADAR enables the weapon to find, track, identifies and engage specific target vehicles while ignoring other targets which are defined as “low priority” or “non-combatant”. In tests, LOCAS searched a large area for SA-8 and Scud-B targets, detected but ignored T-72 tanks, which were defined as “low priority” targets, and finally located, identified and engaged the SA-8 mobile SAM targets. Four LOCAAS weapons can be carried as submunitions by standard SUU-64 tactical munitions dispenser, with or without Wind Corrected Munitions Dispenser (WCMD), Four such bombs can be carried by F-16s, with a total load of 16 submunitions per aircraft. 20 LOCAAS weapons can be carried internally by F-22 Raptor and F-35 Joint Strike Fighters. Internal carriage can also be provided by B-1 Lancer, and B-2 Spirit bombers as well as by various land based systems, including advanced versions of Multiple Launch Rocket System (MLRS) rocket Army Tactical Missile System (ATACMS) missile.

Other applications are considered for naval use, as part of the Lockheed Martin/US Navy VLAAS concept. As LOCAAS are released over the area of operation, they use Global Positioning System (GPS)/Inertial Navigation System (GPS/INS) to navigate through several waypoints enroute to the assigned target area. LOCAAS can operate singularly or in coordinated “swarms”, where they maintain open communications with each other and with the mission control. Swarms are providing real-time intelligence and live target information from a wide area of operation. When targets of opportunity or priority targets are located, when assigned an autonomous mission over enemy area, the swarm will “vote” about the best weapon positioned to engage it. Collaborative targeting is also provided by the use of beyond line of sight data Link, which communicates between the LOCAAS and remote operator, to sustain “man-in-the-loop” capability especially against moving targets.