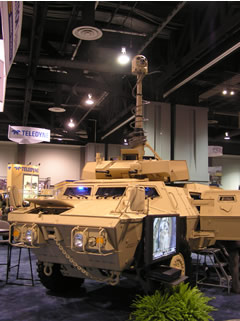 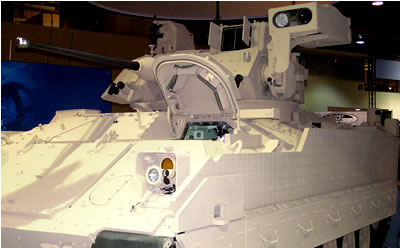 The 2006 AUSA convention provided the showcase for armored vehicles manufacturers to discuss upgrades and modernizations proposed for current armored vehicles, and provide a glimpse into the future direction of AFV, particularly in relation to robotics, unmanned ground vehicles systems (UGV) and the Future Combat Systems (FCS) related programs. 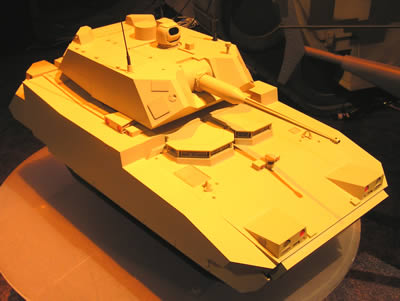 Similar platforms were displayed by Textron Systems Marine and Land, which brought two of its vehicles – the M-1117 armored security vehicle, shown in a new scout configuration, and Dingo II all armored vehicle, a US version of the German Dingo armored vehicle, developed by Krauss Maffei Wegmann (KMW). Other armored wheeled vehicles included the new RG-33L protected vehicle, positioned to compete with the Buffalo and Cougars currently operated by the US Army and Marines. BAE systems also displayed the RG-32 light protected vehicle. Both vehicles are riding on the success of BAE’s RG-31, which has won the trust and confidence of warfighters in Afghanistan and Iraq, where they are operated by Canadian and U.S. forces. Force Protection Company is also beefing up its product line, with the addition of the Cheetah lightweight 4×4 protected vehicle, which is positioned to compete with BAE’s RG-31. However, at AUSA the company preferred to present their most popular platform, the Cougar 6×6, equipped with remotely controlled weapon station. 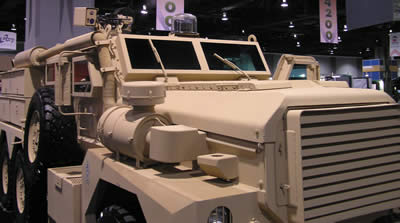