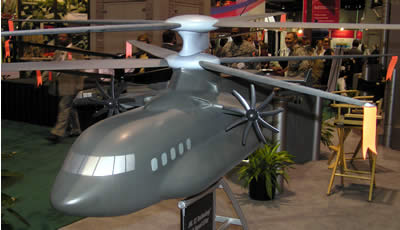 Aerial transportation is one of the critical capabilities required for the future force. Parallel to the development of ground combat elements of FCS, The U.S. Army is pursuing new technologies to significantly increase its air mobility. These technologies range from derivatives of existing capabilities, such as the Bell/Boeing Tilt Rotor system, to the X2 counter-rotating rotor system, which represents new potential for heavy lift capability.

At AUSA 2006, Sikorsky outlined the latest X2 technology applications for manned and unmanned applications, including the giant Joint Heavy Lift (JHL) flying Crane, and High Speed Lifter helicopter, both proposed as tactical heavy lifters for the FCS family of vehicles. Both the JHL crane and high speed heavy lifter will be able to lift around 40,000 lbs (around 20 tons).

The flying crane will be designed to carry outsized stores externally, utilizing a four point witch external load handling system flying at a top speed of 165 knots (305 km/h). The High Speed Lifter will be able to carry the same weight internally, flying at speed of up to 245 knots (453 km/h).

Bell-Boeing displayed models of its heavy lifters, based on the tilt-rotor technology, already matured with the V-22. The Quad Tilt Rotor (QTR) aircraft is positioned as a “transformational Runway Independent Aircraft”. The aircraft will be capable of vertical takeoff, with cargo capacity similar to that of a C-130J. QTR will be able to carry 106 combat troops, vehicles and other loads weighing up to 25 tons. It will be capable of lifting 25 – 30 tons, fly 2,100 nm unrefueled with 11 tons of payload, cruising at a speed of 275 knots. Compared to rotary wing vehicles, QTR will be able to fly at higher altitude, up to 25,000 feet, well above the reach of anti-aircraft fire. 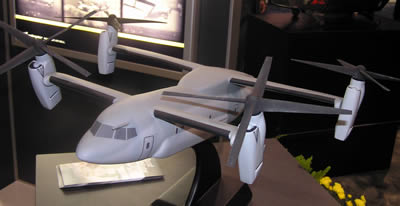 A more futuristic concept pursued by Bell and Urban Aeronautics from Israel, is the X-Hawk, a “flying car” concept utilizing two lift fans and two turbine powered pusher propellers providing the vehicle lift, stability, lateral thrust and maneuverability for vertical and horizontal flight. Its unique capabilities are promising to revolutionize the approach to urban warfare, adding a vertical dimension to maneuverability in the ‘urban canyons’. X-Hawks will be able to assault a face of a building, enabling troops to assault inside through a window or evacuate the wounded for safety. Combined with other operational tactics, these capabilities could provide a truly force-multiplying effect.

Less futuristic but certainly welcome by all pilots is the Quadeye panoramic night vision system, from Kollsman, an Elbit Systems of America company. Quadeye provides a panoramic night vision goggles (PNVG) covering a central 40 deg. Binocular field of view plus monocular vision of an additional 30 degrees to either side. The extended view is similar to the normal eye’s peripheral vision and reduces the need and degree to which panning the head is needed when wearing goggles.