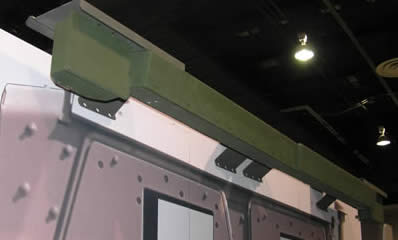 Various active protection concepts were on display. Trophy and Iron Fist are the two Israeli systems competing for an upcoming IDF active armor program were on display. Active protection is recognized as one of the most urgent requirements resulted from the acute vulnerability of the Israeli and US armor to non-frontal attacks, a typical threat of asymmetric warfare, as demonstrated by Israeli armor during the 2nd Lebanon War.

A non-lethal RPG defeat concept is the RPGNet, incorporating a net shaped “trap” made of super-high strength ballistic fiber, developed under a joint ONR/DARPA program. The trap will intercept and disrupt the flight trajectory at a safe distance from the protected vehicle.

Other techniques are proposed to protect light vehicles. These include an airbag based RPG protection concept displayed by Textron Systems. The Tactical Rocket Propelled Grenade Airbag Protection System (TRAPS) is designed to defeat RPGs by employing modified, commercial airbag system to protect vehicles, soldiers and guard posts, without risk of injury to nearby dismounted soldiers or non-combatants. Both TRAPS and RPGNet are providing multi-directional protection but since they are low-cost solutions, are designed as “one-shot” systems and are therefore vulnerable to attacks by rocket salvos.

Other active protection systems displayed here included the inner layer defense, developed by Northrop Grumman. The system uses a close-in radar warning system, triggering the launch of an interceptor from fixed fans of multiple launchers mounted at the corners of the protected vehicles. Northrop Grumman is also proposing the Porcupine RPG countermeasure assembly, integrating a pack of interceptors (4 or 8) mounted on a remotely controlled weapon station which also carries an XM307 crew served weapon.

Another directional active protection system is the Close-In Countermeasure System (CICM), developed by BAE Systems. CICM was demonstrated to the US Army during the early APS evaluation phases. According to BAE Systems, CICM will be configurable for land vehicles and helicopters. Raytheon’s Quick-Kill active protection system, currently under development for the U.S. Army’s Future Combat Systems, has not been displayed or discussed despite the public interest in the program.