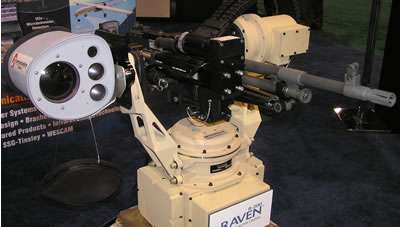 While armed robotics still belong to the future, remotely controlled weapon stations are already saving lives in the combat zone, limiting warfighter’s exposure to enemy fire while maintaining vigilance and effective coverage of their surroundings. Although such systems are available from a number of manufacturers worldwide, AUSA 2006 was dominated by Recon Optical’s M101 Common Remotely Operated Weapon Station (CROWS), of which 300 examples have already been delivered to U.S. forces. Production of 580 units has been contracted between 2004 and 2006, The U.S. Army is planning to procure 3,000 additional systems under a new program currently under competition.

A different stabilized weapon system which is expected to compete for the new Army program is the Protector Remote Weapon System (RWS). The first model was the M151, currently operational on some 1,300 U.S. Army Stryker armored infantry carriers. Protector is also available in a lighter version, with an “above the roof weight” of only 158 lbs (72 kg), including a loaded M240 weapon. The system uses the Protector’s electro-optical package, configured in a lower silhouette design. The Israeli company RAFAEL also unveiled a new lightweight weapon station, called Mini-Samson, mounting a light machine guns and electro-optical sensors. The system is proposed for the Merkava Mk 4 upgrade, which will include various protection improvements, including the Trophy active protection systems and remotely controlled weapon, operated by the loader.

Sofar, remotely controlled weapon stations were provided only for vehicular platforms, but the US Marine Corps is evaluating the use of an ultra-light, man portable remotely operated weapon system for dismounted applications. The Telepresent Rapid Aiming Platform (TRAP) T-250D Mk IV system can be mounted on a vehicle, but can also be dismounted within few minutes, enabling users to remotely control a variety of weapons, sniper rifles and light machine guns. The system is currently undergoing tests with the Marines. Procurement decision is expected by mid 2007.

One of the unique capabilities of remotely controlled weapon is the ability to aim at targets, based on external sensor cueing. One such example is the integration of gunshot detection system and CROWS. BBN, RAFAEL and AAI were among the companies addressing this requirement at AUSA 06. AAI’s Projectile Detection and Cueing (PDCue) system uses a tetrahedral array, or conformal microphones distributed at the four corners of the vehicle. Another acoustic gunshot detector is the Boomerang II, from BBN. Over 100 systems are already deployed in Iraq. The U.S. Army has contracted BBN to supply additional 106 such systems to equip more units in Iraq. The system was designed to operate in a noisy environment, such as on the HMMWV. Boomerang can automatically slew weapons or sensors to “close the loop” and rapidly engage the incoming fire with lethal counter effect.

Acoustic gunshot detection systems are also becoming available in man-portable applications, providing early warning from a wide range of threats that can be characterized by an acoustic signature. Man-portable Acoustic Area Protection Systems (AAPS) were also displayed by General Dynamics C4. These systems were developed by the Australian based Land Warrior Acoustic Systems company. The system provides detection, classification and localization of acoustic signatures associated with various types of weapon discharges, from small-arms fire, through to mortars, RPG and artillery. AAPS is available as a wearable system, vehicle mounted units and as static, unattended ground sensors. The system provides continuous passive acoustic surveillance (no deaf periods) and is able to generate threat identification in both azimuth and elevation.

Accurate detection and localization of sources of fire can be provided by electro-optical means. Overwatch, developed by the U.S. Army Space and Missile Command integrates two types of sensors, a staring thermal sensor covering wide area, and a narrow-field of view thermal sensor, used for threat identification and localization. Target information and imagery is disseminated via radio data communications, enabling immediate display of firing incidents on distributed FBCB2 situational pictures. In Israel, a similar system known as Spotlite II was developed for similar applications. Derivatives of this system have been operational for several years by the Israeli forces, providing protection and early warning from hostile attacks. 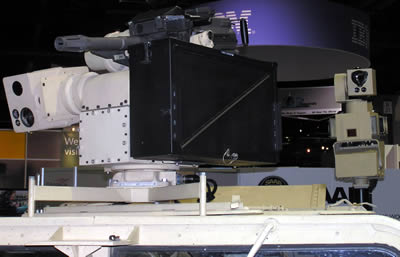