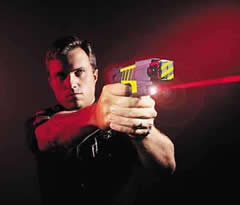 Electrical shock weapons are designed to cause Electro Muscular Disruption (EMD) which, when affecting an unprotected human completely overrides the central nervous system and directly control the skeletal muscles. Unlike bullet impact or chemical agents, that are most effective when hitting specific body organs (respiratory system, heart or head) EMD weapon is effective wherever direct contact is made with the subject’s skin (even through few layers of clothing). Employed either as a direct contact of from stand-off distance, as a stun gun, the EMD effect causes an immediate uncontrollable contraction of the muscle tissue that result in physical debilitation regardless of pain tolerance or mental focus. Existing EMD weapons require physical contact with the target using hand held shockers or stun guns, such as the Taser, which uses compressed air cartridge to fire a pair of darts at the target. The darts are linked to wire conductors to deliver an electrical shock from the gun to the target.

Another stun weapon called Stinger uses a pyro charge to power four-dart system providing the Stinger with greater velocity, accuracy and greater effective range of close to 10 meters. The weapon uses four darts, rather than two, used on Taser to improve the probability of hit. Stinger is now offered with strap-on TruVu video gun camera accessory, which can record the entire engagement (audio and video) for evidence and debriefing. More advanced designs currently in development will have wireless capability and could engage a target at extended range.

Further research is directed into wireless electro-muscular incapacitation technologies, including systems such as Extended Range Electronic Projectile (XREP) pursued by Taser and the US Navy. This wireless Taser is developed as a shoulder fired projectile is designed for effective range and characteristics comparable to blunt impact projectiles such as 40mm “bean bag” kinetic munitions. It is designed for use at distances of 30 meters and beyond.

A different concept is the Sticky Shocker, developed by Titan, with DARPA’s support. This wireless shocker can be launched by M203 or M79 rifles, as well as 37mm non lethal launcher. Sticky Shocker clings to a human target inflicting an electrical stun. Effective at up to 10 meters, the projectile contains a battery which excites several short high voltage pulses (50KV) per second. Other developments of EMD munitions call for the miniaturization of stun cartridges, which enables them to fit into 40mm or 5.56mm ammunition. Different method of wireless stun weapon application is “laser induced plasma” weapon, which use artificial lightning effects to stun and incapacitate a target. Initial applications of such technology include the StunStrike and Portal Denial System which are currently maturing into operational systems.

“Sentinel” Taser Area Denial System (TADS) is a different application of the Taser Anti-Personal Munition (TAPM) EMD weapon, designed for perimeter protection, covering entryways, building interiors, corridors or rooms. Effective at a range of 8 – 15 meters, Sentinel is controlled via camera installed on remotely controlled pan-tilt platform, to enable surveillance and effective engagement of targets in day, or night, indoor or outdoor. It is equipped with 7 Taser dart cartridges, which can be fired in different directions. Once fired each Taser dart pair remains activated until manually turned off. Seven subjects, per magazine, can be kept incapacitated at once by the independent Taser circuits. The Sentinel covers an arc of 160 degrees 30 feet deep. Sentinel can be used as part of a lethal/non lethal dual force system.