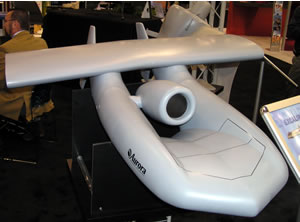 The 21 foot wingspan aerial vehicle will weigh about 2,600 lbs. The empty weight will be 700 lbs., Excalibur will be able to carry a payload of up to 400 lbs. To enable the attack role, Excalibur will be compatible with Hellfire, APKWS II, Viper Strike and SPIKE. Excalibur will combine VTOL launch and recovery, high-speed flight (460 knots), and low speed loiter (100 knots) into one aircraft. The vehicle will be able to operate in a STOL or STOVL mode for increased mission durations or payloads. The Excalibur’s weapons carriage concept is unique. When the aircraft is on the ground, weapons and payloads are placed over the wings to protect them from damage from dust or debries. After takeoff, Excalibur rolls upside-down to normal flight pattern, with payload and weapons in normal position under the wings.

It is powered by a turbine engine, placed in oblique position, generating thrust and lift for forward flight and rotating into vetical, for take-off and landing. The turbine generates sufficient thrust to accelerate the vehicle to dash speed, in excess of 300 knots, enabling the Excalibur to reach flash points in half the time of an attack helicopter. The UAV can also loiter over the target area for much longer, even after flying long distances. Excalibur uses a unique three-fan design to lift augmentation for vertical takeoff and landing. The battery powered lift fans are embedded in the wings and fuselage. The wing stored fans slide out to augment turbine thrust during takeoff and landing. Excalibur will be cleared for operation at altitudes up to 40,000 feet, and 3 hours flight endurance.

The flight control system will be designed to enable high level of autonomy, since the aircraft is not be remotely piloted, like current Predators, operators are able are expected to focus on mission planning, finding, and engaging targets instead of flying the aircraft.

Excalibur is under development as a technology demonstrator aircraft, funded by the US Army’s Aviation Applied Technology Directorate. Excalibur is scheduled for flight in 2007 pending availability of funds.

Highly autonomous flight control system will reduce human involvement in controlling the platform, enabling the operator to focus on mission planning, finding, and engaging targets. The Excalibur, designed by Aurora, is scheduled for flight in 2007. General Dynamics Robotics Systems (GDRS) is responsible for the ground control station and data links.

Excalibur is developed by Aurora Flight Sciences in conjunction with the Army Aviation Applied Technology Directorate and the Office of Naval Research. Aurora conducted extensive wind tunnel testing of scaled-down vehicles and plans to test a proof of principle aircraft in 2007, after which, the company plans to continue the development into full scale system.