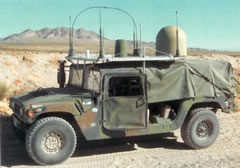 The U.S. Marine Corps are evaluating On the Move / Over the Horizon (OTM/OTH) capabilities for deployable maneuver elements, providing command and control elements with efficient, broadband connectivity for voice and data communications.

The M2C2 systems, designed by Raytheon is comprised of an integrated communications suite carried on a HMMWV, and transportable with a single UH-60 class helicopter. The system supports nine radios, including two enhanced position locating and reporting system (EPLRS) , four SINCGARS VHF sets, a PRC 150 UHF, two PSC-5 satellite communication (SATCOM) radios, all accessible through workstations connected to the terminals can also display video and images. Several M2C2 vehicles can be linked into a network, to support a deployed command post.