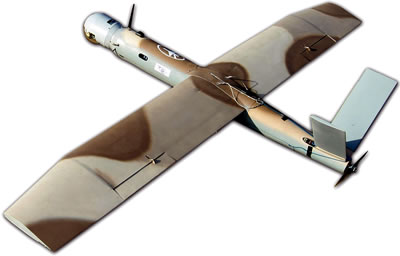 June 4, 2007: RAFAEL unveiled an enhanced version of the Skylite B UAV system, offering extended mission endurance of up to three hours, operating at ranges up to 35 km. The improved system also includes an encrypted digital communications and data link. The system was developed under cooperation between RAFAEL and BlueBird Aero Systems. The new Skylite weighs 8 kg (1.5 over the basic Skylite B)

Skylite B followed the design of the canister-launched Skylite A vehicle, redesigneed with a V-tail desegn, larger wing span (240 cm compared to 170 cm in Skylite A). Th enhanced version has a wider wing span and more powerful batteries. Skylite B uses a stabilized payload and enhanced ground control system, to offer a robust “soldier proof” system. Despite the enhancements, the vehicle’s weight remained at 6 kg. Following a long series of developmental test flights, RAFAEL demonstrated the new mini-UAV to the Israeli Army Land Forces Command to be followed by more demonstrations overseas. SkyLite B is positioned to support field units at the battalion level and below, including Special Forces. The mini-UAV has an endurance of 90 minutes. It can be operated in various airspeeds, effectively handling and maintain flight path and position in rough weather conditions and high winds of up to 30 knots.

Skylite B uses a lightweight catapult for launching. Weighing only four kilograms, the catapult is folded into the carrying bag when not used. Canister launching capability of Skylite A was retained with the B version. The UAV is retrieved by soft landing, with the assistance of a parachute and inflatable airbag. The UAV can be returned to flying condition immediately after landing, by replacing the battery and parachute and folding the airbag. The Mini UAV is equipped with rechargeable Lithium-Polymer batteries, which enable extended missions of up to 90 minutes (50% longer than the Skylite A). The SkyLite B system uses the D-STAMP miniature, gimbaled, stabilized EO payload delivering high definition images from an altitude of 300 – 2000 feet.

The level of details provided by the system enables positive identification of targets including recognition of an armed, man-sized target and vehicle identification. The Skylite B is automatically piloted on planned course missions, continuous tracking of a static target, surveillance of a crowded urban area, scanning an axis, accompanying a combat force, tracking personnel and vehicles, as well as directing a combat force to its target. Tracking of mobile targets is facilitated by automatic EO target tracker.

During the demonstration, the IDF was shown the new mini-UAV’s capabilities to provide real-time quality intelligence to a deployed infantry unit, and its potential to deal with various mission scenarios, such as on-going urban security, as well as scenarios occurring in traditional warfare situations. This was achieved within the required data flow, accuracy and picture quality ranges. The demonstration was carried out successfully in harsh weather conditions consisting of rain and strong winds.

Skylite B is one of several mini UAV systems considered by the Israel Defense Forces for deployment as ‘battalion mini UAV’ system. Apart from potential sales of the system to the IDF, RAFAEL plans to market the Skylite B worldwide. To date, RAFAEL holds contracts for the SkyLite B system from several customers both in Israel and abroad. In the USA, the system is marketed by the joint venture RAFAEL formed in 2005 with Advanced Ceramics Research and Cubic Advanced Tactical Systems.