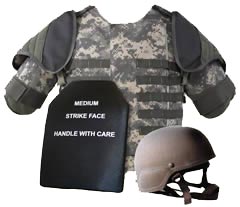 Current body armor suites are designed to defeat most threats encountered on the modern battlefield. However, when configured for maximum protection, combat gear is becoming so heavy that it inhibits free movement and maneuverability, limits peripheral vision and causes dangerous heat stress that adversely affects performance, turning the protected soldier into a slow, vulnerable target.

Body armor has become a standard issue in all armies, and law enforcement agencies, and is commercially available to civilians operating in high threat situation. The efficiency of these vests varies, as protection, weigh and comfort levels are proportional to their cost. Designers of personal body armor are trying to balance between maximum protection and comfort. Such armor should defeat multiple hits of high level threats while maintaining the lowest possible weight, and provide the wearer with unrestricted movement, without degradation of his performance.

In the early days, typical body armor included a ‘flack jacket’ style vest, made of a soft fabric designed to protect the wearer from low-speed fragments, shrapnel and a harder ‘trauma plate’ placed over the chest, protecting the ‘center of mass’ – including the most sensitive organs, from injury by high speed bullets fired from firearms. Traditionally, ‘combat assault’ type vests were composed of soft fabric made of glass fibers. More advanced vests were produced from synthetic aramid fibers such as Kevlar or Twaron. Other materials now include the high performance polyethylene known as Dyneema or Spectra. Vests produced from these advanced materials are providing superior protection (NIJ Level II, II+) usually stopping small-arms fire, particularly 9mm. Most vests are designed with special ‘pockets’ located in the front, back and, sometime, at the sides, where protective panels called ‘inserts’ are placed. These panels are made of High Density Polyethylene (HD-PE) or ceramic materials, enabling units to tailor the level of protection to match anticipated threats. For example, equipping soldiers positioned at highly vulnerable sentry posts, or protecting the gunner, exposed in a gunner’s position on mounted patrols, will be more protected than the rest of the patrol, located in relative safety inside the protected vehicle, but required to dismount from the armored vehicle when on ‘foot patrols’.

Two types of materials are currently used for personal body armor – High-Performance Polyethylene (HPPE) fibers, known as Spectra or Dyneema, produced by Honeywell and the Dutch company DSM and several compositions of Aramid fibers – known as Kevlar or Twaron fibers, produced by DuPont and Teijin. While the bullet-proof vest or ‘body armor’ provides relatively effective protection from low-velocity fragments and some high velocity projectiles (up to 9mm and, in some levels 5.56 or 7.62mm bullets), effective protection against common battlefield threats, such as AK-47 Kalashnikov, M-16 rifles as well as sniper rifles, requires enhanced protection by special inserts, designed to stop these high velocity, high energy threats.

Advanced body armor and assault vests are designed as modular sets, capable of upgrading their protection against specific threats, at a reasonable weight and cost. The concept calls for the use of high protection ‘inserts’, formed to fit into special pouches integrated into the vest, to protect vital organs.

In the USA, funding for body armor procurement is currently increasing to protect the surge in forces deployed in Iraq. Replacement of older equipment and battle-damaged gear, introduction of enhancements for the Interceptor Body Armor (IBA) and additional protective items are underway. Current body armor systems are procured in ‘suites’, comprising the Outer Tactical Vest (OTV) textile based bullet-proof ‘soft armor’, ceramic based Enhanced Small Arms Protective Inserts (ESAPI) and ESAPI Side Plates, and the Deltoid Auxiliary Protectors (DAP) made of composites. The total unit cost for each suit is approximately $3,500, depending on the specific configuration. The latest, most advanced version of the personal body armor suit, used by the British Army is the Osprey Advanced Combat Armor (ECA). This new protective gear was recently demonstrated by the Irish Guards prior to their deployment to Iraq in May 2007. Combat tested Osprey body armor provides enhanced coverage with full front and back of protection of the torso.