Home Aerospace High Flyers to Ride on the Edge of Space 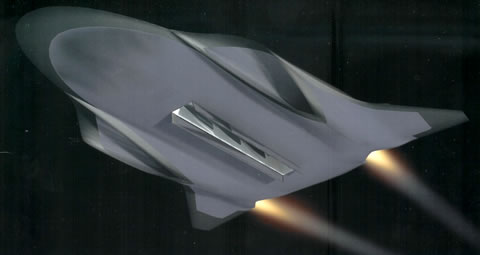 Two ‘near space’ platforms designed to fly at the edge of space in the high stratosphere are the FALCON and WaveRider. Their mission – to deploy their cargo anywhere on earth within few hours or deploy cargo to lower space orbit, responding within minutes to urgent mission requirements. These high flyers will be designed to carry our fast strikes deep into enemy territory, anywhere in the world. Such a project known as FALCON is pursued by DARPA and the US Air Force. Lockheed Marin, the system’s developer is planning to fly the first FALCON demonstrator by the end of 2018, and is preparing to have such platform operational in about 10 years.

FALCON will demonstrate the future capability to pursue time critical targets with reusable strike vehicles capable of global reach. Other roles include operationally responsive spacelift. The program will support the development and flight demonstration of three hypersonic technology vehicles (HTV) beginning in December 2008. FALCON will consist of hybrid vehicles launched conventionally from bases in the US, ascend to ‘near space’ altitude where it accelerates to Mach 6, executing its mission and return to its home base for rapid retasking.

The biggest challenges are propulsion and heat management, that must be dealt with before the FALCON can take off. He aircraft will employ turbine engines morphing into supersonic combustion ramjets, or Scramjets, capable of sustaining speeds of up to Mach 10. The program involves maturing of critical technologies, including hypersonic cruising utilizing turbine based combined cycle (TBCC) propulsion, high temperature materials, high lift-to-drag technologies, thermal protection by new materials, thermal management and active cooling, guidance, navigation and control at high temperatures and velocities, before flight tests can begin. When matures, FALCON will offer a reusable Hypersonic Cruise Vehicle capable of delivering up to 12,000 pounds of payload at global distances up to 9,000 nautical miles in less than two hours.

A similar platform expected to be demonstrated around that time is the X-51 WaveRider, developed by Boeing. This vehicle will demonstrate capabilities similar to the FALCON, as Boeing aims to compete with Lockheed Martin to fulfill the future USAF requirement for global strike with the hypersonic atmospheric vehicles. The waveRider will integrate a scramjet engine developed by Pratt & Whitney, a boost rocket motor derived from an ATACMS missile matched with an airframe built by Boeing. It will demonstrate acceleration from boost (Mach 4.5+) to Mach 6 -7 cruise.