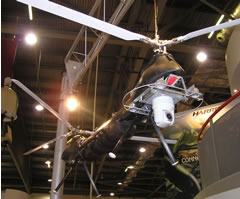 UAVs at DSEi 07: A novel design of an unmanned aerial vehicle, utilizing tandem rotor configuration was introduced by Dragonfly Pictures. The company displayed at DSEi 07 its electrically powered DP-6 Whisper tandem rotorcraft, as part of a comprehensive border surveillance systems solution provided by Harris. The main advantage of this unique design is the low acoustic signature associated with the electrical propulsion and tandem rotor design, enabling the Whisper to remain stealthy, particularly at night and over densely forested or urban terrain..

According to Michael W Piasecki, founder and president of Dragonfly Pictures, the 50 lb air vehicle can carry a payload weighing up to 26 pounds. Carrying 15 lbs DP 6 can operate on a 30 minute mission. Extending mission duration to 60 minutes requires allocating 12 lbs for additional batteries, leaving only 2.2 lbs for payload. The payload could comprise of a single, or dual EO day/night sensor, as well as acoustic sensors, loudspeakers or electronic surveillance gear. According to Piasecki the Whisper which could be employed on longer missions utilizing a novel ‘hot spot’ power recharging scheme, where the helicopter could perch on rooftops for passive surveillance and recharging, hopping from point to point to cover a large area over an urban or open terrain. The UAV is designed to locate the recharging hotspot automatically, performing automatic landing and takeoff. DP-6 may require about 15 minutes recharging its batteries for 30 minute flight.

Alternatively, the UAV could be tethered, providing unlimited endurance over a designated point. DP6 is designed to dash at a maximum speed of 70 knots and climb at a rate of 850 ft per minute regardless of operating altitude. Typically, these systems could operate continuously for over 24 hours, hovering at an altitude of about 30 meters above ground. At these positions, Whispers could carry out force protection missions by covert or overt perimeter security, surveillance missions or support operations in urban or densely wooded or jungle environment with communications relay or provide an ad-hoc hub for wireless networking.

The company is working on a larger version, powered by a piston engine, capable of carrying payloads in the range of 30 pounds (15 kg) on missions of about 10 hours. Dragonfly Pictures expects these systems to compete for the future US Marine Corps Tier II UAV program. DP-6 and DP-12 are two examples of Dragonfly Picture’s latest VTUAV concepts, which include heavier and faster long-endurance platforms.