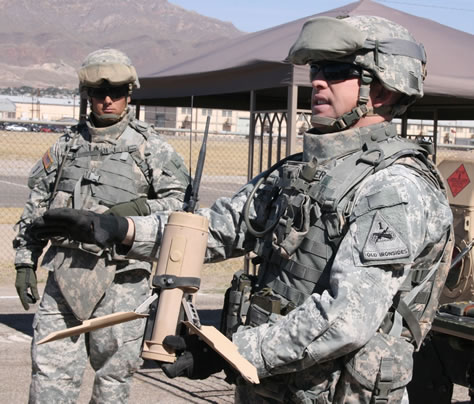 The U.S. Army has accelerated testing of two Future Combat Systems (FCS) robotic prototypes, based on positive feedback from soldiers who are using early versions of the systems in with current forces in Iraq and Afghanistan. Through the next six months the FCS Lead System Integrator team will deliver 25 iRobot Small Unmanned Ground Vehicle (SUGV) units, and 11 Class I (Block 0) Honeywell Miniature Aerial Vehicles (MAVs), for field testing by the Army Evaluation Task Force (AETF) at Fort Bliss. Following the operational test, scheduled for May 2008 and, by September 2008 the Army will decide whether to field an early version of the robots or continue their development under the core FCS program. This effort is intended to provide an early capability of SUGV and MAV to soldiers in the field. FCS will procure a number of the early SUGV units and then transition to the full network-capable SUGV as scheduled by the FCS program.

The 30-pound SUGV is a small, lightweight, soldier-portable unmanned ground vehicle that is capable of conducting military operations in high-risk environments, including urban terrain, tunnels, sewers and caves, without exposing soldiers directly to potential hazards. The Class I (Block 0) UAV, a platoon-level asset and the smaller of the two FCS unmanned vehicle classes, will provide dismounted soldiers with unprecedented reconnaissance, surveillance and target acquisition capabilities on the battlefield. The Class I UAV can operate in complex urban and jungle terrains with vertical takeoff, hover and landing capability, and can be operated autonomously or controlled by dismounted soldiers.

Both tests will be separate and occur in parallel, although separately from the official FCS “Spi-Out 1” effort scheduled for initial field testing in 2008. Spin-Out 1 is the first of three planned infusions of FCS capabilities to the Current Force. Equipment and technologies included in Spin-Out 1 will provide enhanced situational awareness and communication capabilities through technology insertions to Abrams battle tanks, Bradley fighting vehicles and HMMWV vehicles.

“The acceleration of the SUGV and Class I (Block 0) UAV prototypes and testing underscores the Army’s commitment to enhancing soldier survivability and mission effectiveness by getting the capabilities into their hands as soon as possible,” said Dennis Muilenburg, vice president-general manager, Boeing Combat Systems, and FCS program manager. “The decision to accelerate, driven in part by feedback from soldiers in theater, also confirms that we are on the right track to deliver a crucial capability that is needed and desired by our soldiers currently serving in combat operations.”

30 May 2008: The U.S. Army Evaluation Task Force at Fort Bliss, Texas is preparing for an extensive evaluation of a number of elements of the Army’s Future Combat Systems (FCS) this summer. If all goes well, some systems could be fielding in 2011. FCS elements considered for early fielding as part of the program’s ‘Spin Out 1″ process. Spin Out 1 consists of unattended sensors, Non Line-of-Sight Launch System, elements of the Joint Tactical Radio System’s Ground Mobile Radio (JTRS GMR) “B Kit”, including the radio, computing system and remote controllers. These B Kits will be installed in existing vehicles such as Bradleys, Humvees and M-1 Abrams battle tanks. Spin Out 1 elements were demonstrated earlier this month on Capitol Hill.