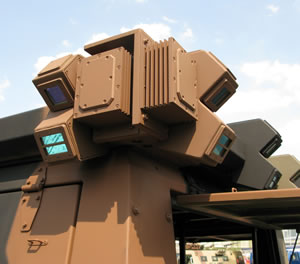 The devastating experience suffered by the Israeli Army in Lebanon two years ago, accelerated the development of active defense systems (ADS), for heavy, as well as medium and light armored vehicles. ADS are now becoming standard with the IDF latest MBTs and AIFVs, as well as part of the basic protection suite of modern families of vehicles, such as the British FRES and U.S. Army FCS. At Eurosatory, some ADS developers presented new designs, adapted for light APCs and even light utility vehicles. Among these are a lightweight version of the Aspro A from Rafael, the different derivatives of the ADS from IBD and Rheinmetall defense, LEDS 150 from Saab Aviatronic and IMI’s Iron Fist.

RAFAEL’s ASPRO A (formerly known as Trophy) Active Defense System (ADS) is under production for the newest Israeli Merkava Mk4 tanks. The system can engage several attacks from each side simultaneously, while maintaining relatively low collateral risk. The system neutralizes all types of RPGs and anti-tank missiles, eliminating penetration by the weapon, as well as residual effect, by kinetic hit. Aspro A can operate on stationary vehicles or those in motion. Aspro A is also provided in a lightweight version, for the protection of armored personnel vehicles, with an ultra-lightweight model, designed for light armored vehicles such as the JLTV.

Another ADS planned to enter production in 2009 is the AMAP-ADS developed by the German company IBD Diesenroth, partly owned by Rheinmetall Defense. IBD entered multiple cooperation agreements with a number of companies to promote and integrate its ADS with future armored vehicles. Among the AMAP-ADS based systems shown at Eurosatory, were the SHARK, developed with Thales, a similar system offered on the mu lti-purpose vehicle (MPV) from Iveco and the ADS used on the Swedish Spitterskyddad Enhets Platform (SEP) modular armoured tactical system. All these applications use the same principle established by IBD, which, similar to reactive armor, uses sheet explosive to generate a blast wave to intercept and disintegrate the treat at very close range. 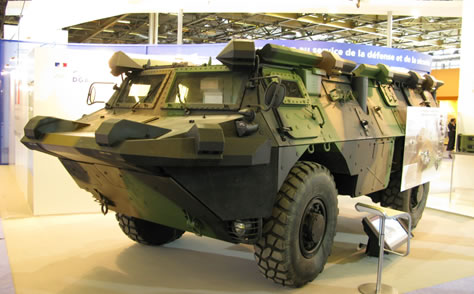 The French derivative of IBD’s ADS is the Shark, developed by Thales and funded by the French MOD. In the works since 2004, the system is currently being tested on a modified VAB armored personnel carrier, equipped with multiple modules, including the interceptors, control systems and sensors. The system is designed for simultaneous intercept of multiple treats and is designed to respond to threats within a 15 meter distance. A similar protection using caseless explosive charge, developed by Verseidag was also presented. While this armor is generally classified as ‘reactive armor’, its concept of operation is similar to the active protection explosive system.

Saab Avitronics and Mowag introduced the Land Electronics Defense System (LEDS) at Eurosatory, installed on the Piranha III EVO armored vehicle. The system integrates various defensive capabilities, from signature management, through ‘soft kill’ by using countermeasures to ‘hard kill’ utilizing counter RPG interceptors. According to Saab, the LEDS 50 version of the system was ordered by the Dutch Army in 2005 for its CV-90 tanks and is under evaluation in several other countries. A version of the system designated LEDS 100, is equipped with two high-speed countermeasure launchers, deploying Galix family pyrotechnic countermeasures produced by Lacroix. The system was recently tested by Jordan’s King Abdullah II Design & Development Bureau (KADDB), installed on a modified M-60.

The hard-kill equipped LEDS 150 system, configured with Mongoose hard-kill missiles on the Piranha, is scheduled to undergo live-fire tests in Switzerland later this year. The company is optimistic over chances of this system to be considered as candidate for the British FRES program, Saab Avitronics has committed to offer LEDS for possible selection as part of a possible future solution for the FRES program.

IMI unveiled at Eurosatory 2008 an advanced version of it’s Iron Fist ADS, developed for the protection of medium-weight armor protected vehicles, such as the Wildcat, on which it was installed at the show. Iron Fist uses two twin-tube rotatable launchers, employing redesigned fin-stabilized canisters (compared to the previous mortar-like ammunition used in the previous design). IMI claims the canister has better aerodynamic qualities and is more stable in flight, thus enabling the system to address treats at various ranges. Redesigned as a multi-dimensional protection system, Iron-Fist provides the crew with early warning and situational picture of incoming threats, employing ‘soft-kill’ means at mid-range. Only if the threat is not eliminated by other means, Iron Fist intercepts it, automatically (?) with remotely detonated hard-kill munitions.