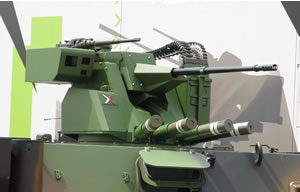 Remotely operated weapon stations are becoming standard issue with almost all new armored vehicles. At Eurosatory 2008, many of the well established RWS systems were presented, as well as some newly introduced systems, addressing both lightweight and heavier types of weapons.

Among the lightweight models, two new systems were introduced by Panhard and Sagem Défense Sécurité and Rheinmetall. Panhard and Sagem announced cooperative teaming developing a lightweight RWS, called Weapon under Armor for Self-Protection (WASP). The system is equipped with a light machine gun coupled with an observation and infra-red sight. The system can be controlled by remote, from helmet mounted sight, a joystick or from the Système d’Information Terminal ELémentaire (SITEL) battle management terminal, if already installed on the vehicle. According to the manufacturer’s data WASP is well-adapted to operations in built-up or mountainous areas, providing weapon elevation capability of -40° /+90°.

For the first time and Rheinmetall Defense demonstrated its Lance manned / optionally remote controlled turret on the Piranha Evolution vehicle. This turret is designed to mount guns from 25 to 40mm caliber, as well as secondary armament and guided missiles. The remotely operated version of the Lance will enable the crew to load or unload the weapon under armor. At present the turret is fitted with Rheinmetall’s MK30-2/ABM automatic cannon.

The Hitfist 30 OWS is a prototype model used for technology demonstration in Poland, where the Italian product was tested mounted on a BMP-1. The two-axis stabilized turret mounts a 300 ATK Mk44 gun, 7.62mm Coax, and optional side-mounted Rafael Spike anti-tank missiles. The prototype turret mounts multiple sensors including CCD cameras, an IR camera and a laser rangefinder. The turret can be operated on a single, or as traditionally used in manned systems – by two soldiers optionally supporting ‘hunter killer’ operating scheme. Unlike most overhead weapon stations, the Hitfist 30 OWS has an opening on the base of the turret, providing access and protected operation capability to the gun systems.

Elbit Systems displayed two versions of its 25-30 unmanned turrets, one installed on a French Army Renault VAB 6×6 vehicle specially equipped to demonstrate advanced urban warfare capabilities. The vehicle was fitted with Elbit System’s see-through armor (STA), enabling the crew to monitor the area around their vehicle, in both day and night, maintaining omni-directional viewing of the combat scene, constant situational alert, even when operating in close quarters urban environment with the crew is ‘buttoned up’ inside for safety. 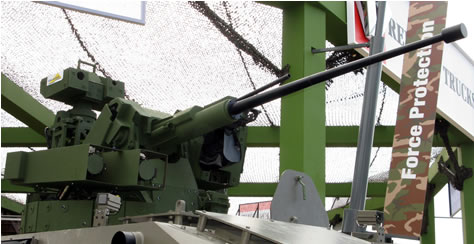