With the deployment of Merkava Mk 4 tanks equipped with Rafael Defense Systems’ Trophy (ASPRO-A) Active Protection Systems (APS) along the Gaza border last month (January 2011), that followed a Merkava tank being hit by a Kornet anti-tank missile fired by the Palestinians, battle testing of the Trophy APS was only a matter of time. Today (1st March 2011), the system was baphtized in combat, proving its worth in a first combat engagement with a hostile RPG, fired by Palestinain anti-tank team from Gaza. The system and crew performed exactly as expected, integrating automatic response to neutralize an immediate threat, rapid situational understanding and decision and forcible response, effectively eliminating the threat. 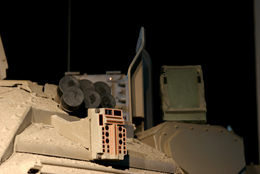 According to IDF sources, the Merkava tank was patrolling the border with Gaza, when a ‘missile launch’ was detected by the tank’s defensive system. Trophy uses the Elta System’s EL/M 2133 ‘WindGuard’ radar as the primary sensor detecting missiles and RPG threats. When such threat is classified by the system as ‘acute’ (aimeing directly at the protected vehicle), the system alerts the crew and tracks the missile closing-in on the tank. As the RPG enters the system’s kill-zone, Trophy automatically activates its hard kill countermeasure (Multiple Explosive Formed Penetrators – MEFP), destroying the threat at a safe distance from the tank. Some reports indicated the intercept was close enough to trigger the tank’s automatic fire ‘Spectronix’ protection, which have lead to Palestinian claims of actually hitting the tank. Shortly afterwards, IDF soldiers identified several terrorists in the launching area and fired in their direction, scoring a hit.

Such a procedure is inherently supported by the Trophy. Beside its role as the Trophy’s primary sensor, detecting the threat and calculating Time-to-Impact (TTI) and plotting the optimal intercept point, the Windguard radar also localizes the firing position of the missile being tracked, enabling the IDF troops to rapidly engage active enemy positions, eliminating follow-up attacks on its armor.

During the Second Lebanon War in 2006 more than 40 tanks were hit, most of them by anti-tank missiles, repeatedly fired by Hezbollah from hidden positions that were difficult to detect by IDF tank crews. Following this conflict, the IDF accelerated the development of Active Protection Systems (APS), and is currently fielding the system with tank battalions, being equipped with new armored vehicles. This includes new Merkava Mk4 tanks being equipped with APS and the new Namer Infantry Fighting Vehicles which will also mount the system.

A different version of Rafael’s Trophy has recently completed a six-weeks test evaluation series on a Stryker Armored Fighting Vehicle, withstanding numerous missiles and rockets attacks. The test was conducted in collaboration with the U.S. Office of Secretary of Defense and the U.S. ARMY at Aberdeen Proving Ground, as part of an evaluation of domestic U.S. and foreign APS solutions. Rafael is also developing a compact vesion of the system called Trophy Light, being evaluated for use with U.S. MRAP All Terrain Vehicle (M-ATV). The system is also being evaluated for the protection of Israel Navy fast patrol boats, which, like the tanks, are exposed to RPG and missile attacks.