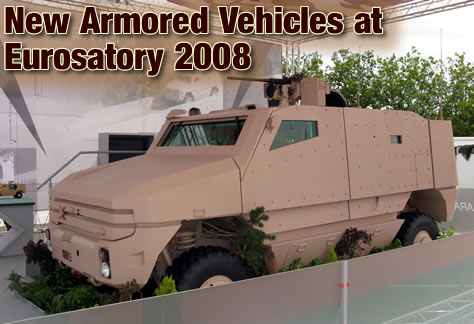 Armored vehicles are traditionally a significant part of the Eurosatory show and this year’s event provided a venue for many companies to exhibit new armored vehicles, designed to meet the challenges faced by modern defense forces, primarily concerning growing threats encountered in asymmetric warfare, requiring heavier armor and, in addition, to new and sophisticated means of protection. 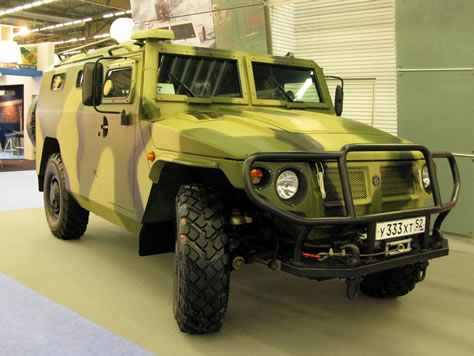 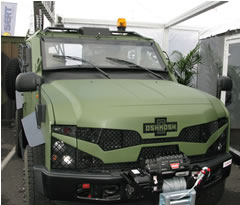 A brand new vehicle shown for the first time was the Russian SPM-1 Tigr (Gaz 233034) intended for use by Russia’s ministry of internal affairs, as a transport, operational and service vehicle. The Tigr produced by Arzamas Machinery Plant of Nizhni Novgorod, Russia is about the same size of the AM General Humvee. It is offered in several five door configurations, accommodating four, 1+3, 2+7 or 2+4 soldiers. The vehicle has integral protection at Russian level class V (comparable to NATO level 2) protecting from artillery fragments, grenades, and small arms up to 7.62 from 10 meters. Tigr can travel at a speed of up to 140 km/h on highways, or 80 km/h cross country and has fuel endurance for 900 km travel.

Nexter unveiled the Aravis at Eurosatory, claimed to be the most protected multi-mission vehicle in its category. This new 12 ton class 4×4 is designed to offer protection defeating 14.5 mm threats, 10 kg mine (under the belly or wheels), artillery splinters and shrapnel from nearby 155 mm rounds and effective protection from IED attacks. All protection levels are complying with the high ‘level 4’ standard. Nexter uses a Unimog chassis (already used in other heavy armored vehicles produced by Swiss MOWAG and Krauss Maffai (KMW) Aravis maintains high tactical mobility on road and cross country. It is transportable by air in a C-130, A400M and C17. The vehicle is designed with large internal protected space of 9.5 cubic meters, carrying a crew of two and four or six soldiers, or other tactical equipment (command and control, reconnaissance equipment etc.) The crew compartment is accessible through multiple side doors. At Eurosatory 2008 the pre-production Aravis vehicle carried a remotely controlled weapon station. 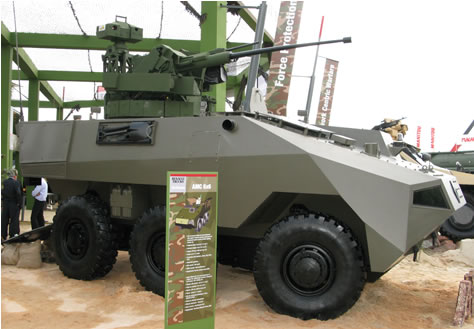 Renault AMC 6×6 vehicle is a 20 ton class multi-purpose armored vehicle designed as troop and weapon carrier (mortar, gun), support and reconnaissance vehicle. At a combat gross weight of 18 – 23 tons, the AMC can carry net payload of 6.5 to 10.5 tons, depending on configuration. The vehicle is powered by a 370 hp engine which can be uprated up to 460 hp diesel (Euro 4/5 standard) coupled to an automatic transmission. Utilizing an overhead gun position, the fighting compartment is fully available for seating accommodation and combat load for eight soldiers. 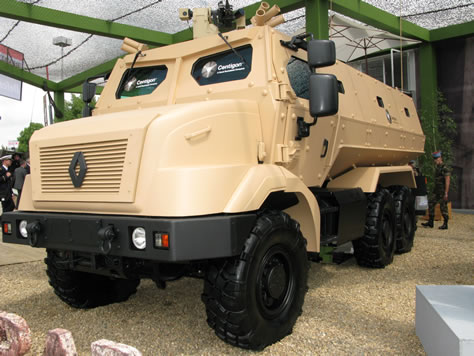 A French version of the MRAP was presented by Renault. The armored trucks offered at weight levels ranging from 15 to 22 tons, are powered by the 320 hp Euro 4/5 engine, traveling on road at a maximum speed of 90 km/h. The vehicle is designed with a V shaped hull, and has an integral high level of protection against ballistic, mines and IEDs. The vehicle is coming in 10 and 12 seat configurations. Other versions of Renault’s armored vehicles include a heavily armored version of the Sherpa 3A HI (High Intensity) 4×4 vehicle designed for reconnaissance and liaison missions. At Eurosatory Renault demonstrated the vehicle with remotely controlled overhead weapon station, further enhancing crew protection. 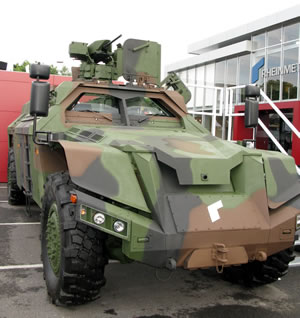 Rheinmetall Defense brought the highly protected GEFAS demonstrator vehicle to Eurosatory 2008, two years after showing the vehicle’s mockup here (Eurosatory 2006). The new design has been subjected to several survivability tests that confirmed its protection exceeds the current standards for high level armor protection. This impressive vehicle employs a revolutionary design which, according to Rheinmetall, ‘is opening a fresh chapter in the history of armored vehicles’. GEFAS will be introduced as a family of modular highly mobile vehicle designs in the 15-28 ton weight class offering protection levels far overmatching current asymmetric threats. Rheinmetall Defense is leading an industry team sharing the GEFAS as a privately financed developmental effort. The team includes engine maker MTU, ESW and STW Sensor-Technik, armor protection specialist IBD and Timoney Technology of Ireland.

In Germany, the Bundeswehr’s requirements for highly protected armored vehicles are being addressed by Krauss Maffei’s “protected command and role-specific vehicle designated GFF-4. This highly armored 6×6 vehicle is designed for command, control and forward service support roles. Similar capabilities to be offered with smaller vehicles are addressed by a collaborative effort pursued byKMW and Rheinmetall defense that introduced here new class of armored multi-purpose vehicle family weighing 5 – 9 tons. This carrier designated Armored Multi Purpose Vehicle (AMPV) should be ready for serial delivery by 2011.

Another German vehicle unveiled, was the GP-F2T prototype, carrying the Fennek platform into a modular, scalable design. GP-F2T is a generic, flexible platform which could be tailored to different missions. Accommodating a wider variety of mission payloads, the GP-F2T can be designed with a larger crew and payload compartment, and elevating mast. It is fitted with two engines (fore and aft location) separately powering the front and rear axels, offering dual redundant propulsion and automotive system and better maneuverability and cross-country mobility.

Hatehof, a specialist vehicle designer and manufacturer from Israel is introducing a range of Xtream highly protected vehicles at Eurosatory. The company is already producing the latest wheeled armored vehicle operated by the Israel Defense Forces – the 8.6 ton Wolf, under cooperation with Rafael. The heavy version of the Xtream is powered by a Cummins ISBE 275 turbo diesel engine coupled to an Allison 3000 automatic transmission and Axeltech transfer case. This high mobility, protected, all terrain vehicle, is capable of fording water obstacles 1.1 meter deep, negotiate 36° side slopes and 60% gradient. Coming in two protection and weight levels of 9 or 16 ton configurations Xtream carries eight soldiers. The vehicle is protected to STANAG 3, 4 and anti-RPG protection levels. The vehicle is equipped with front and rear steering, offering a turning radius of only 6.4 meters, uncommon for vehicles of this weight class. The new vehicle family was designed to meet specific requirements for highly protected high mobility vehicle. 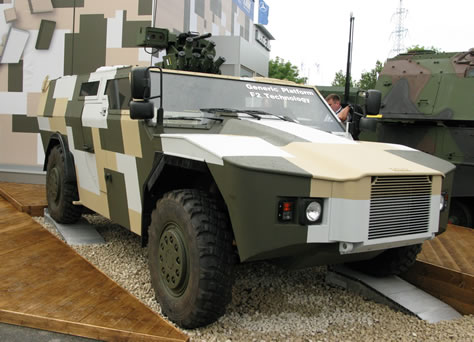