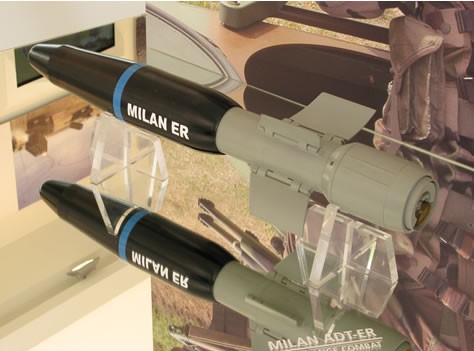 The Russian company Bazalt has introduced two new members to the RPG family of weapon – the RPG-28 anti-tank tandem rocket and the RMG multi-purpose, anti-material rocket. Both are launched from disposable canisters. The RMG uses a tandem warhead, with thermobaric main charge optimized for multi-purpose anti-structure applications. It is capable of breaching a brick wall at a range over 500 m’, penetrating 300 mm of reinforced concrete, or over 100 mm or homogeneous steel armor.

Western origin urban assault weapons were also displayed by Rafael, Dynamit-Nobel of Germany, U.S. based Raytheon, Nammo from Norway and the Swedish company Saab. Similar to the Russian design, western systems are derived from existing anti-tank shoulder-fired rocket launchers, namely the Panzerfaust, Matador, SMAW (B-300), LAW-72, and AT-4. The urban assault derivatives of these weapons are less of tank killers, but have much more powerful effect when buildings, bunkers or soft vehicles are targeted.

Another new missile is under development at Belfast based Thales UK Air System Division. This missile is designed to be used from lightweight aerial platforms such as unmanned aerial vehicles and light helicopters. The LMM carries a 3kg high explosive fragmenting shaped-charge warhead with programmable laser, proximity or impact fusing, making the missile effective against airborne targets, light armored, unarmored and built structures type of targets. The missile can engage targets at a range of 8 km. The prototype has already performed flight tests on Scheibel’s S-100 Camcopter unmanned helicopter, which can carry two missiles.

IAI unveiled at Eurosatory 2008 a long awaited multi-purpose version of the Lahat missile, designed to defeat ‘soft’ targets. Initially, the lightweight (12.5 kg) Lahat missile was equipped with a shaped charge an anti-tank warhead weighing 2.5 kg. This warhead is capable of penetrating up to 800 mm of steel armor. The new warhead weighs the same as it’s predecessor, but uses a fragmentation sleeve fitted to a smaller shaped charge designed to create both armor penetrating and blast fragmentation effects. The new warhead developed by Israel Military Industries (IMI) is effective against exposed human targets, soft (unarmored) vehicles and light armored vehicles. It is known that, standard shaped-charge warheads are not effective against soft targets due to their ‘surgical’ highly directional effect.

IAI is also developing a larger laser guided weapon based on the Extra rocket, developed under a joint program between IAI and IMI. The new missile called Nimrod Mk 3 will be able to attack targets at ranges beyond 55 km with an accuracy-level within one meter or less, using a combination of inertial/GPS mid-course guidance and laser homing. Nimrod 3 is optimized as anti-structure weapon, employing shaped trajectory capabilities and specialized warhead to effectively and surgically destroy precision targets in built-up area with minimum collateral damage. IAI’s Nimrod Mk 1 has been in production since the early 1990s. This long-range laser guided missile has a range of about 26 km. Nimrod Mk1 has been operational for over a decade, in which it accumulated an impressive operational record in combat.

Eurosatory 2008 provided Raytheon with an international venue for the debut of its future Hellfire successor, jointly proposed by a team comprising Raytheon and Boeing for the U.S. Joint Air-Ground Missile program (JAGM). Lockheed Martin is also known to have submitted its proposal for the program. Northrop Grumman is also a candidate. At least two of the bidders are likely to receive DOD funding to continue development under risk reduction program for three years, leading to a selection of a prime contractor for the US$6 billion program by 2011. JAGM will be ready to replace the Hellfire and Maverick missiles currently in service by the middle of the next decade. According to Raytheon sources, the Raytheon-Boeing team will utilize a new tri-mode seeker derived from developments made for other programs. A dual-mode version of this seeker is currently used in the Precision Guided Missile (PAM) scheduled to enter production in 2009. The Tri-mode seeker will be fielded with an Improved PAM weapon by 2012. By 2011 the same dual-mode seeker is expected to be fielded with the Medium-Range-Munition 120mm tank-fired guided weapon while the tri-mode version is expected to be used in Raytheon’s proposed version of the Enhanced Small-Diameter Bomb (SDB-II).