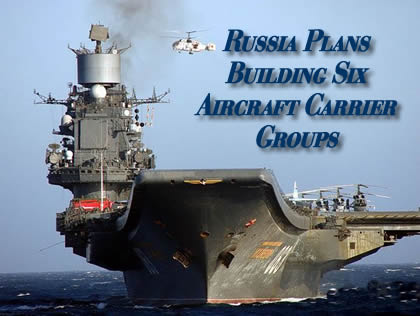 Speaking to journalists on the occasion of the Russian Navy Day celebrations, the commander of the Russian Navy, Admiral Vladimir Visotskiy confirmed the the Russian Navy is planning to deploy six aircraft-carrier groups with its Northern and Pacific fleets. They will be operated within a new, network-centric task groups, closely integrated with Russian air force and air-defense assets via Russia’s military-satellite network

Adm. Visotskiy indicated that six new aircraft carriers and all the necessary support ships will be built to sustain this momentum. Construction of the first aircraft carrier is expected to begin in 2012. The six groups could be fully deployed by 2025.

At present, the Russians operate only a single aircraft carrier Admiral Kuznetsov with the Northern Fleet. Moscow have yet to decide where to build these vessels, as the only facility capable of such scale of work is located in the Nikolayev Shipyard on the Black Sea in the Ukraine.

In the mid 1980s the Russian Navy launched three Type 1143.5 carriers, Admiral Kuznetsov, and Varyag which was delivered as scrap to China. The third carrier, Admiral Gorshkov is being refurbished for the Indian Navy, to be fielded by 2013. Only one aircraft carrier remained in Russian service – the Admiral Kuznetsov. The vessel, carries 12 fixed wing aircraft, including Su-33 fighters and Su-25 attack aircraft as well as various types of Ka-27 special mission helicopters (AEW, ASW, SAR).

Addressing the construction of Borei class nuclear-powered missile carrying submarines, the Admiral said the Navy plans to modernize at least one Borei-class strategic nuclear submarine which is considered to be the mainstay of the naval component of Russia’s strategic nuclear forces until 2040. Three vessels of this class are currently in construction at the Sevmash shipyard in Severodvinsk, in the Arkhangelsk region. However, but their completion has been delayed by test failures of the Bulava ballistic missile, its main weapon. Adm. Visotskiy said the first three submarines would be commissioned without significant changes to the initial design, but the fourth will undergo upgrades.

Russia Maintains a Squadron of 10 Ships in the Mediterranean