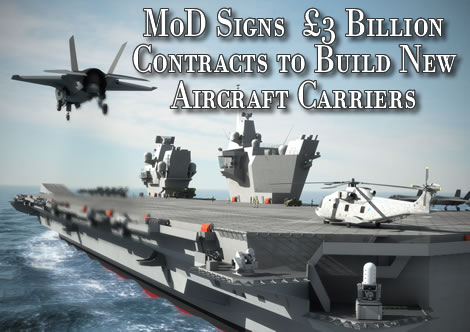 A project for the construction of two new aircraft carriers was launched today (July 3, 2008) with the signature of contracts worth around £3 billion, between the British Ministry of Defence (MoD), the newly-formed UK maritime Joint Venture, BVT Surface Fleet, and the Aircraft Carrier Alliance, assigned for the unprecedented job. The contract was signed onboard the Royal Fleet Flagship HMS Ark Royal, one of the Royal Navy’s existing aircraft carriers.

BVT, formed officially two days earlier by BAE Systems and VT Group on 1 July 2008, won the lion’s share of the program, amounting to £1.325 billion for the construction of large subsections, to be produced at Govan on the Clyde and Portsmouth. BVT plans to begin construction later this year. 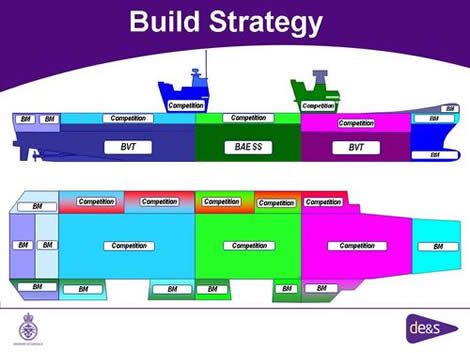 Members of the Aircraft Carrier Alliance received a total £1.675 Billion of the program. £300 million are allocated to BAE Systems yard at Barrow-in-Furness, for the construction of large subsections. Babcock Marine won £675 Million for the construction of the bow section Rosyth, where final assembly and completion will be made. £425 million were allocated to Thales UK for design and engineering and £275M for BAE Systems Integrated Systems Technologies (Insyte) for the design and supply of Mission Systems. These contracts followed preliminary contracts signed earlier in 2008 ordering long-lead items for the two aircraft carriers, including raw materials and systems (steel sheets, diesel generators, aircraft lifts and key electronics.)

According to Baroness Taylor, Minister for Defence Equipment and Support, the new construction work will create and sustain around 10,000 UK jobs at the peak of production.

The future aircraft carriers, to be named HMS QUEEN ELIZABETH and HMS PRINCE OF WALES, will be the biggest and most powerful surface warships ever constructed in the UK. The new carriers are expected to enter service in 2014 and 2016 respectively. Both vessels are expected to remain in the fleet for at least thirty years. Each carrier will displace 65,000 tons at deep load. Its flight deck will measure 280m long by 70m wide. Each carrier will accommodate around 1,500 personnel and operate a mix of up to 40 aircraft, mostly vertical take off and landing (VTOL) capable F-35B Lightning II and various helicopters. 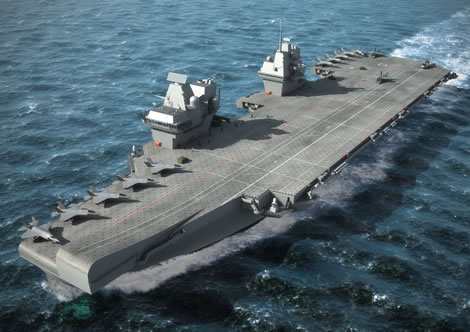