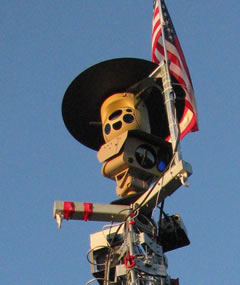 Over 300 Rapid Aerostat Initial Deployment (RAID) towers and over 60 ‘blimp’ systems have been deployed as part of the Persistent Surveillance and Dissemination Systems (PSDS2) currently fielded in Iraq and Afghanistan, safeguarding forward operating bases (FOB), improving surveillance in day and night and accelerating response to evolving threats.

The innovative Rapid Aerostat Initial Deployment (RAID) system employed a variety of sensors tethered from an aerostat, and later evolving to other platforms, including fixed towers and relocated masts. These systems are widely used for the protection of forward operating bases (FOB) in Iraq and Afghanistan. Since its initial deployment in Afghanistan in 2003, over 60 systems have been deployed. 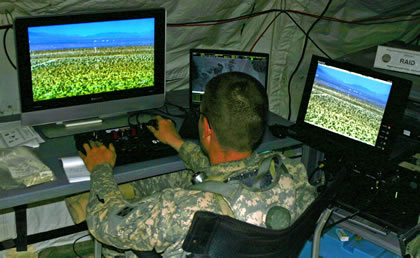 The system uses a 17 meter aerostat carrying a payload with a total weight of 200 pounds at an elevation of about 1,000 feet. Larger (32, 38 meter) aerostat configurations are currently in development to support heavier payloads of up to 1,000 pounds, elevated to altitudes of 2,500 feet. RAID systems are also employed on towers elevating to 107 feet in height.

The tower version uses a 80 foot and 107 foot towers. The US Marine Corps deploys the system designated Ground-Based Operational Surveillance System (G-BOSS) employing two cameras, a radar and a radio link to a remote ground station. The Amry’s Base Expeditionary Targeting and Surveillance Systems – Combined (BETSS-C) uses a single camera.

RAID generally utilizes EO/IR sensors, radars, flash and acoustic gunshot detectors, to provide persistent, panoramic surveillance of the covered area, providing timely warning of potential threats and other events valued for intelligence purposes. The main sensor is an EO/IR payload, carrying a laser rangefinder, designator and target marker. In some configurations, radar, RF signal interceptors or gunshot detectors are employed, providing a primary scanning sensor pointing the EO/IR payload to points of interest, where movement or suspicious actions are detected. Other sensors can cue the RAID as well, including counter mortar radars such as the LCMR, which detects mortar attacks and can cue the RAID in seconds. 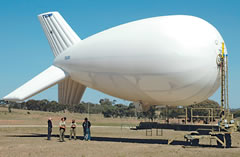 RAID systems provide essential situational awareness necessary for improved security and daily operations in and around the FOB. For example, convoy leaders check with RAID operators for ‘road clear’ indication before leaving the FOB.

RAID towers and aerostats are being deployed as part of the Persistent Surveillance and Dissemination Systems (PSDS2) currently fielded in Iraq and Afghanistan. Basically, each sensor is monitored by a payload operator, but in locations controlling several sensors, more advanced systems are required. When connected to Army Battle Command Systems (ABCS), the system can display a comprehensive operational picture, depicting all participating friendly forces locations, and supporting such forces with live streaming video being broadcast on the military intranet, as events unfold. Such service provides quick-reaction forces and first responders at an event scene with live perspective on the operational area. Streaming video is automatically compressed to fit the capacity of each user’s communication links.

PSDS2 uses an advanced efficient and intuitive interface to support operator’s multi-tasking and focus. The visualization tools used enable the presentation of multiple video feeds as thumbnails, or ortho-rectified ‘footprints’ superimposed on a terrain map or satellite image, clearly depicting the sensor coverage and orientation. 3D terrain features and building models are also displayed to improve orientation. This, ‘in-context’ perspective view, shows the scene from any desirable viewing angle or elevation, to optimize the employment of sensors such as UAVs, ground observations.

At AUSA 08 Raytheon displayed a typical payload control display employing such sensors. The display supports multiple video feeds displayed as ‘thumbnails’. The operator monitors the area under surveillance on a 3D situational map display, employing the Terrasight interactive 3D map, and video integration tool developed by Sarnoff, presenting the video in a dynamic, ‘footprint’ over the 3D map. The information displayed by the system provides realistic assessment of the locations, dead zones and visibility of potential targets, as they travel behind land curves, buildings etc.

Different PSDS2 systems can share information and images with each other and when there is overlapping sensor coverage, one system can backup another. Task forces at other locations can directly participate in theater response assessment and decision making aided by the exchange of imaging and situational pictures. Furthermore, PSDS2 data is also shared with a larger family of intelligence and C2 systems through the Distributed Common Ground Station (DCGS) Integrated Backbone (DIB). 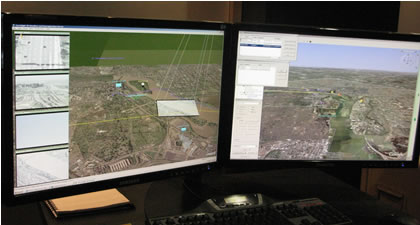