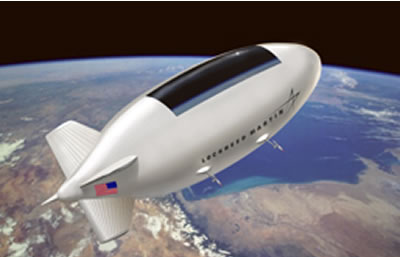 Lockheed Martin Maritime Systems & Sensors, is developing a High Altitude Airship under a technology demonstration program funded the US Missile defense Agency. The unmanned, untethered solar powered prototype airship with be able to remain on station for 30 days at a cruise altitude of 60,000 feet. With a minimum payload capacity of 500 pounds and on-board supply of 3 kW of power the airship will be able to carry a missile detection and warning equipment augmenting current ground- and space-based capabilities. The current program cost is estimated at US $149 million with completion expected by November 2010. Lockheed Martin is already developing a larger prototype airship expected to carry 4,000 pound payloads and 10 KW power.

The High Altitude Airship (HAA) is developed under advanced technology concept demonstration (ACTD) $40 million design and risk reduction program. This prototype is expected to be completed in 2006. Once successfuly demonstrated in flight testing, the HAA is expected to provide a test bed for the Ballistic Missile defense Agency. The HAA will be about 500 feet long, 160 feet in diameter and have a volume of 5.2 million cubic feet.

The target HAA will be even larger. According to Lockheed Martin, the unmanned HAA ‘blimp’ is designed to operate for extended durations at an altitude of 65,000 feet, well above the flying altitude of aircraft or air defense missiles. The blimp’s sensors will cover a ground and airspace footprint of at least 700 miles in diameter and more than 4 million cubic miles of airspace. HAA will be capable of lifting various mission-specific payloads, including radar, communications and passive electronic and imaging (EO/IR) sensors. Unlike satellites, HAA will be able to return to its base for resupply and refitting with different payloads, to accommodate evolving mission requirements. Using helium for lift and four electric-powered propulsion systems for directional flight and control, the HAA would maintain a quasi-geostationary position and have capacity to relocate. The ground-based command and control system will communicate with the airship via line-of-sight and beyond line-of-sight methods. Its vehicle management system will use autonomous, manual and remote-piloted modes, and will monitor vehicle health, perform systems diagnostics, control the system’s operating environment at the equipment bays, and evaluate the hull structure.