The tests, conducted at Fort Stewart, Ga., validated the radar-carrying A160T’s flight characteristics with more than 50 hours of flying time. The new radar will be able to detect and track moving vehicles and dismounted troops under foliage, filling a current surveillance gap. Vic Sweberg, director of Unmanned Airborne Systems (UAS) at Boeing considers the recent test a validation of the “operational readiness of this important capability”. He said that the combination of these unique platform and sensor make a formidable system. 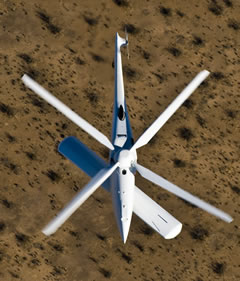 The U.S. Army Research Development and Engineering Command (ARDEC) has already received two FORESTER radars and is planning to acquire a third system from Syracuse Research Corporation (SRC), with options for three additional systems. The system’s development began in 2005 under a $35 million DARPA funded program. As the system has been matured through testing and demonstration, the Army plans to move to the third phase, buying three addional systems. These radars will be installed on A160T unmanned systems.

The Foliage Penetrating Radar System was developed under a joint DARPA/Army program that demonstrated how airborne UHF radar is capable of detecting people and vehicles moving under foliage. The radar can operate under all weather and visibility conditions, providing persistent, stand-off coverage of moving vehicles and dismounted troops under foliage. These radars have already been tested in both single and double canopy foliage, operating on Blackhawk helicopter and on an A160 high altitude, long endurance UAV helicopter.

The A160T is a turbine-powered unmanned helicopter that can perform numerous missions, including intelligence, surveillance and reconnaissance, communications, and precision resupply. It holds the world record for endurance for its class (more than 18 hours unrefueled), can hover at 20,000 feet and can carry up to 2,500 pounds of cargo. The Hummingbird recently was selected to participate in the U.S. Marine Corps Warfighting Laboratory’s Immediate Cargo Unmanned Aerial System Demonstration Program. Boeing will demonstrate that the A160T can deliver at least 2,500 pounds of cargo from one simulated forward-operating base to another in fewer than six hours per day for three consecutive days.

Lockheed Martin has also developed and tested a FOPEN radar. The latest phase of the program, known as TRACER, is currently being tested on a surrogate UAV platform.