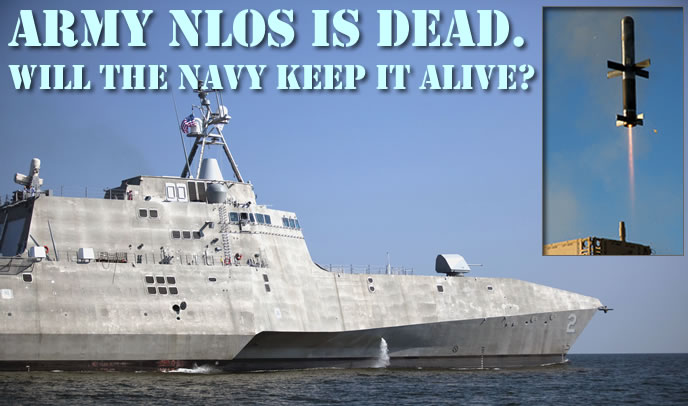 As the U.S. Army recommends terminating the NLOS-LS Weapon System, the Navy will have to keep the program alive, securing the principal surface weapon system of the Littoral Combat Ship

Above: The LCS-2 Independence – the Precision Attack Missile (insert) is the principal surface attack weapon of this vessel.Photos: General Dynamics and Raytheon

Following a review of its precision fires capabilities and requirements, the U.S. Army is recommending to cancel the XM-501 Non-Line of Sight Launch System (NLOS-LS) program. NLOS-LS was developed as a ‘Platform independent Precision Weapon System’, as a common system to be used by the U.S. Army and Navy. The program suffered significant setback in the recent Limited User Test, (LUT) scoring only two hits out of six launches. The system was jointly developed by Raytheon and Lockheed Martin under the Netfires industry team. The missile was intended to become the cornerstone of the new, highly maneuverable light brigade, to be equipped with the ‘Future Combat Systems (FCS) system of systems.

Even before the cancellation of FCS program, in June 2009, the Army systematically eliminated key elements of the program, to save cost. After the termination of the program, only few of the systems considered to be the most mature remained in the acquisition channels. These included two robotic systems, various sensors, networking elements and the NLOS-LS, which remained the only weapon system to survive the cuts, until now…

While the cancellation will relieve the Army of financial burden of a weapon system considered too costly and redundant, since combat brigades already have other precision guided weapons that can deliver firepower at the precision and timely response as the NLOS, the U.S. Navy, which counted on the weapon will have to support the continued development and fielding of the system by itself. The Navy is scheduled to begin at-sea testing of the NLOS-LS medium range surface to surface missile module by 2012.

According to the Navy’s plans, NLOS-LS would become the principal weapon for the Littoral Combat Ships (LCS) ‘Surface Warfare Module’ enabling the vessel to dominate a large coastal and littoral area. Each LCS will carry three Command Launch Modules packed in two shipping containers, carrying a total of 45 missiles. The missile would be used as the ‘long arm’ of the vessel, enabling the LCS team to act upon information obtained by remote intelligence sensors and the vessel’s own sensors – helicopters, UAVs, SIGINT and COMINT.

Launched at individual targets, or in salvos of multiple missiles, the Precision Attack Missiles would be used to defeat enemy over the horizon, inside the bases or at the shoreline, as well as defensively, eliminating attacks by swarms of fast boats. In escort missions, these missiles, supported by helicopters and UAVs, could be used to cover larger areas, protecting merchant ships from small boats attacks. The ability of the crew to control each of the missiles, and selectively aim at specific weak points enable the LCS to effectively engage and defeat larger targets, support friendly forces ashore and reducing the risk of collateral damage. Absent of such a weapon, the LCS will be toothless (the only other weapon on board is the single barrel 57mm gun).

Another advantage of the NLOS system is its flexibility and rapid replenishment. In fact, the ‘missile in a box’ concept could be utilized at sea, rapidly rearming the LCS by helicopters, therefore extending its combat endurance over extended missions.

Given the importance of the weapon to the Navy, it is likely that the program will not meet the fate of other FCS systems and continue through fielding, funded by the Navy. However, in this case, the missile would be tailored for the Navy’s needs and will not necessarily have the operating modes the Army would eventually need. These modes are also likely to be more costly and complicated. Previous reports have indicated that Raytheon proposed to deliver the missiles at a unit cost below $200,000, given a multi-year production of about 9,900 units is secured. This cost is about a third of the cost of a typical naval attack missile currently available (like the Harpoon or Exocet) but it is about three times more expensive than the Javelin or Hellfire missiles, used extensively in Afghanistan. The current cost of a pre-production missile stands on $450,000 per unit.