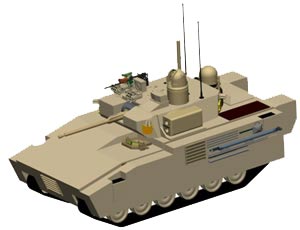 The U.S. Army closed the industry Request for Proposal (RFP) submission process today, effectively launching the formal Ground Combat Vehicle (GCV) contractor selection process. The Army will award up to three competitive contracts in late fourth quarter of Fiscal Year (FY) 2010 to build and test GCV ‘Technology Demonstrator’ vehicles, over a period of 27 months. “We have had good response from industry and now the source selection process will begin immediately. Due to the sensitive nature of this procurement and the Federal prohibition on the release of procurement information, the program office will not release further source selection details until the close of the process,” said COL Bryan McVeigh, program manager GCV.

Following the completion of the Technology Demonstration phase the subsequent EMD phase would run through the first quarter of FY 2016, and include delivery of the first prototype vehicle in FY 2015. The Army is approaching the GCV’s development in an incremental fashion — designing it for adaptability, modularity and scalability to adjust to and incorporate technological change. The source selection process is used during competitive, negotiated contracting to select industry proposals that offer the best value to the Army.

Among the teams submitting proposals are General Dynamics, teamed with Lockheed Martin, Raytheon Company teamed with MTU Detroit Diesel and BAE Systems teamed with Northrop Grumman. SAIC and Boeing, the team that have  led the Future Combat Systems program, which included the predecessor of the GCV is also believed to be competing for the new program. Two foreign companies, Krauss Maffei Wegman and Rheinmetall Defence Systems are also participating.