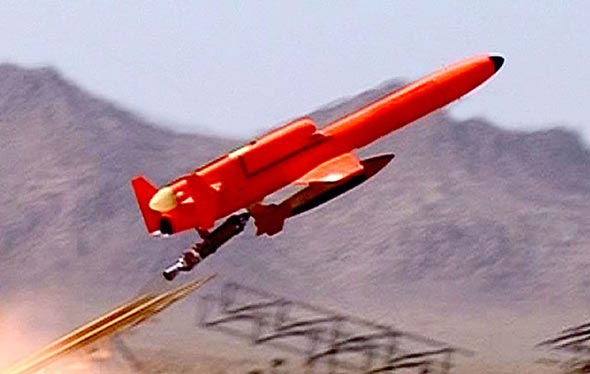 Iran has this week unveiled a new type of turbojet-powered drone designated ‘Karrar’ (striker – in Farsi), described by Iranian officials as capable to perform long-range reconnaissance and attack missions. Iranian Defense Minister, Brigadier General Ahmad Vahidi announced on Sunday that the country’s first home-made long-range Unmanned Aerial Vehicles (UAVs) named ‘Karrar’ has a flight-range of 1,000km. Karrar is described as capable of operating at long range, and in ‘great operational depth’, at high or low altitudes.

According to Iranian reports, on reconnaissance missions the Karrar can record images flying over targets of interest and transmit them back to the ground control as it re-establishes communications. The drone can also carry weapons, two configurations were displayed – carrying a unitary bomb (what seemed to be a 500 lb weapon) on the centerline, or carrying two smaller weapons (assessed by their shape and size, these weapons could be the Kowsar (C-701) anti-ship missiles).

The design of the Karrar traces back to the BQM-126A target drone, developed by the U.S. company Beechcraft in the 1970s. Like the Iranian unmanned plane, the BQM-126 was powered by an expendable turbojet engine, developing thrust around 4 kN. (Iran’s Tolloue 5 turbojet engine, rated at 4.4kN is in production powering some of the country’s long range anti-ship missile program.) The fully loaded BQM-126 weighed about 0.6 tons and offered mission endurance over two hours. Its top speed was 950 kph, with service ceiling at 40,000 ft. It had a wingspan of 3 meters and length of 5.51 meters. This target plane also influenced the South African Skua target drone, developed by Denel. Skua Karrar is believed to be shorter (around 4.meter long), and, carrying less fuel, its useful payload can be increased to around 700 kg. Its cruising speed is 900 kph.

While the origins of new drone could bear upon the U.S. original, the Iranian designers invested significant effort in modifying and shaping it to their demands. The podded turbojet was moved inside the fuselage, with the air intake emplaced in a dorsal fairing, feeding the turbojet through a curved duct, assisting in absorbing some of the radar reflections from the turbine surface. The dorsal intake position cleared the belly for the carriage of stores or weapons on the centerline. To enable aerial carriage, the dorsal fairing behind the air duct has been strengthened, providing attachments for aerial pylons, with ample space for avionics and support systems,while also accommodating the recovery parachute. The center fuselage and forward section provides space for payloads, flight control sensors and, possibly, an internally carried warhead. The swept wings are designed for high speed flight, at relatively high altitude, but videos released by the Iranians also indicate the Karrar is also capable of flying low-level flights.

For what missions is the Karrar designed for? The first question to be asked would be – whether it is an unmanned aerial vehicle (operated as a reusable asset) or is it a ‘one way only’ cruise missile? As it is based on a target drone, Karrar could perform both missions successfully and affordably. Unlike conventional UAVs, it is not designed to operate with real-time, man-in-the-loop, but most likely to fly a pre-programmed mission, however – with more advanced flight controls already available to the Iranians with their UAVs and anti-ship missiles, it could ‘improvise’ with evasive maneuvering to evade potential threats, typically being the characteristics of a cruise missile. The Iranians already gained access to cruise missile knowhow, with the acquisition of Kh55 missiles from the Ukraine. Karrar could be the first manifestation of what they have learned from the Russian Kh55 technology.

Unlike other cruise missiles, Karrar seems to have the unique capability for carrying relatively heavy weapons slung under the wings, or on the centerline. However, it must be assumed that carrying such weapons should dramatically reduce its operational radius. Beyond deep recce missions, two offensive missions, that the drone might be used for, could be extended range anti-ship or missile-defense-suppression. The drone’s range could be further extended by aerial delivery,using transport aircraft, such as the C-130 or P-3 or Il-76 launching Karrars from strengthened underwing pylons. Typically, a C-130 carries two aerial targets.

In a naval attack role, the Karrar equipped with two or four Kowsar missiles could extend the Iranian reach well beyond their coast, without being detected by maritime patrols. Similarly, the drone could be used as an anti-radar ‘missile bus’, or employ ‘suicide attack’ mode, in an attempt to blind the ‘eyes’ of ballistic-missile defense systems – systems such as the THAAD, Patriot PAC-3 that rely on early warning and fire control radars for their operation, being deployed in several Gulf states which are well within Karrar’s combat radius. As the counter ABM mission employs radar homing missiles, the Karrar can be flown without active sensors, engaging fixed targets at known positions. To mask its approach the drone could employ some radar deception techniques to close-in for a quick shot – including mimicking and magnifying the radar signature of the drone to look like a commercial aircraft – such techniques are widely used with aerial targets, enabling a small target to simulate larger aircraft. According to Iranian sources the drone can carry up to four weapons on external stores. Another advantage of the autonomous operation is the communications silence maintained by the drone throughout its operation, minimizing early warning and detection by the defender’s electronic surveillance.

Another question is – could such a platform be used for carrying a nuclear warhead? The commonly agreed threshold for nuclear capable missile delivery is the ability to carry at least 1,000 kg warhead. At its current configuration, Karrar does not seem to be able to lift this kind of payload – yet.