Home Aerospace Falcon is Healthy, Few Tweaks Will Suffice to Fly the Next Mission...

Six months after the first test flight of the Falcon Hypersonic Technology Vehicle’s (HTV-2) which failed to meet its objective, an independent Engineering Review Board (ERB) identified the anomaly that caused the vehicle to exceeding the design flight control envelope. “No major changes to the vehicle or software are required to mitigate the first flight anomaly” said David Neyland, DARPA Tactical Technology Office director, “Engineers will adjust the vehicle’s center of gravity, decrease the angle of attack flown and use the onboard reaction control system to augment the vehicle flaps when HTV-2 flies next summer” Neyland added.

DARPA is planning to repeat the test in late 2011 trying to complete a 30 minute hypersonic flight at speeds reaching Mach 20, covering about 3,000 nautical miles over the Pacific Ocean. The first flight was terminated prematurely, about 9 minutes after launch.

Detailed analysis conducted by the ERB revealed that the most probable cause of the HTV-2 flight anomaly was higher-than-predicted yaw, which coupled into roll thus exceeding the available control capability at the time of the anomaly. “The HTV-2 flight anomaly is characterized as a slow divergence about the longitudinal axis (in roll) which continued until the roll rate reached a threshold where the autonomous flight system commanded flight termination.” The report explained. The review acknowledges data on the relevant aerodynamic parameters for this specific flight regime were limited.

Despite the early termination of flight, DARPA claims the first flight demonstrated significant accomplishments in the area of hypersonic flight. During the most challenging segment of flight, before the flight terminated, HTV-2 transmitted telemetry data on aerothermal, aerodynamic, thermal protection, navigation, guidance and control in the hypersonic flight regime – all critical areas of interest to the program. The flight also demonstrated successfully the first ever use of an autonomous flight termination system. Additionally, the flight represented the inaugural launch of the Minotaur IV booster. The booster demonstrated the ability to fly at extreme angles of attack up to 89 degrees to meet stringent release requirements for the HTV-2.

When developed into mature weapon systems, Falcon type vehicles could introduce new category of weapon enabling a rapid reaction global strike capability against time critical threats, employing platforms that could not be confused by Russia or China as intercontinental ballistic missiles, thus triggering offensive response by other nuclear powers.

A parallel technology currently in development is the X-51 WaveRider, developed by Boeing and Rocketdyne (Pratt & Whitney). This vehicle will demonstrate capabilities similar to the FALCON, and could be a competitor to Lockheed Martin, on a future USAF requirement for global strike with the hypersonic atmospheric vehicles. The WaveRider integrates a scramjet engine developed by Pratt & Whitney, a boost rocket motor derived from an ATACMS missile matched with an airframe built by Boeing. In May 2010 WaveRider performed the first flight, flying at a speed of Mach 5 for 200 seconds (short of the 300 second goal). In subsequent flight tests Waverider will accelerate from this Mach 5 speed to demonstrate cruising at Mach 6 -7 speed. 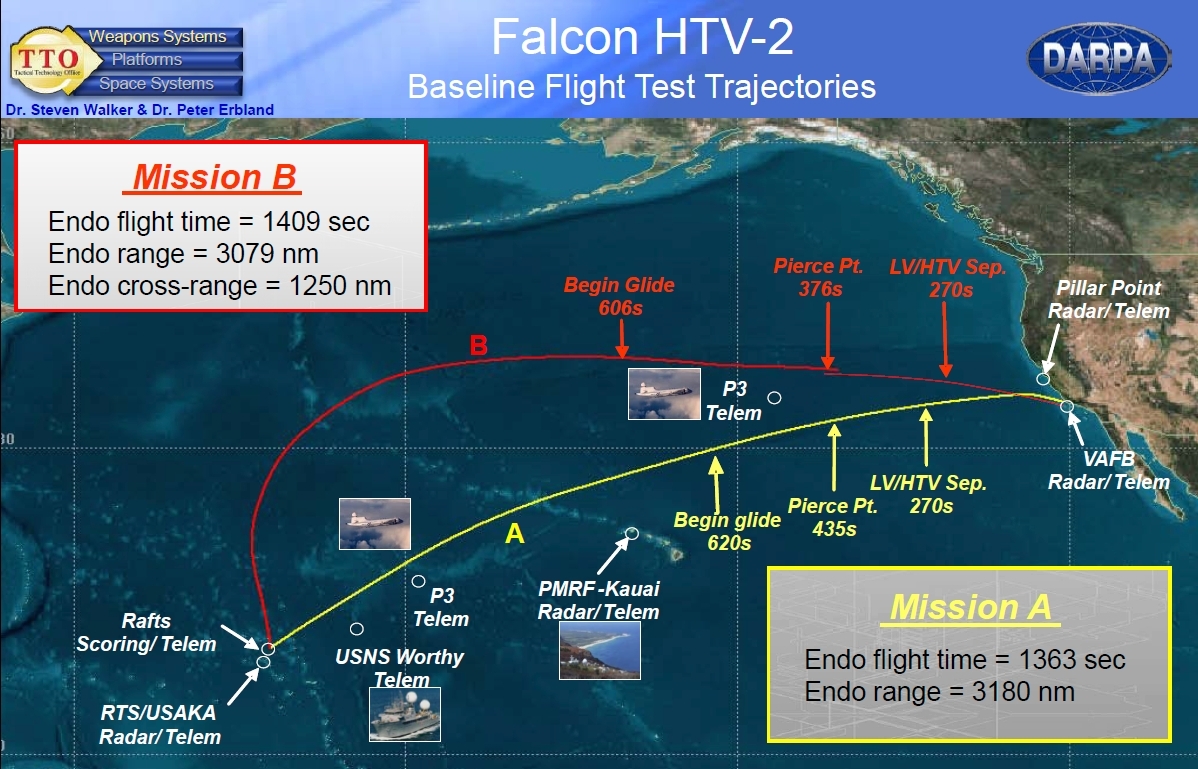