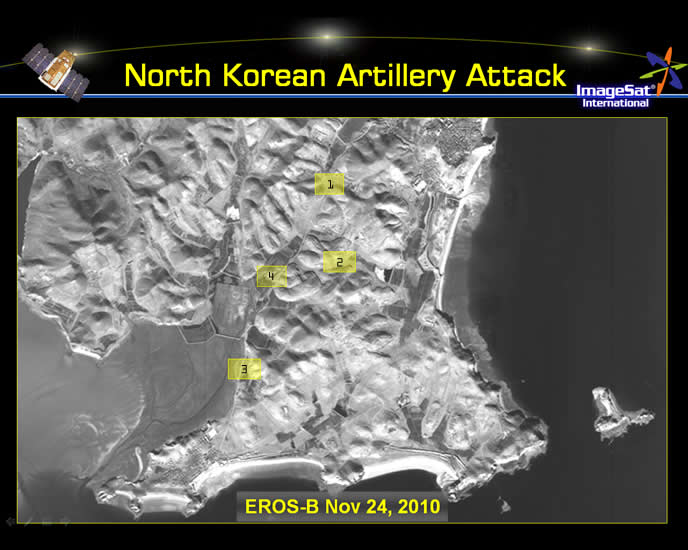 North Korea fired scores of artillery rockets at the South Korean Yeonpyeong island on November 23, 2010, killing two soldiers. Two soldiers and two civilians were killed in the attack, 18 were wounded. (Read our post reporting the incident on the same day)

The South Korean army returned fire with artillery and scrambled fighter planes to the area. The image above taken by Israel’s Eros B satellite, obtained by Defense Update from the satellite operator Imagesat, shows the empty firing positioned lined up on the roadside, from where the North fired about 200 rockets. A standard 122mm BM-21 rocket battery comprises six vehicles, each carrying 40 ready to fire rockets in launch tubes.

This satelite image (above) clearly shows the ‘smoking gun’ – scorch marks trailing each of the four positions, the fifth shows faint scorch marks, while the sixth (at the bottom) doesnot have such marks at all, indicating that the battery actually fired rockets but was leaving the site before spending its ammunition. The cause of that action could be South Korean counterfire directed at these launchers. Ten impact craters are clearly seen in the image, hitting within a 150 meter circle, centered about 100 to the left of the rocket battery. The number of rockets fired by the four-five vehicles also matches the numer of hits counted on the South Korean island (about 200 rounds).

Following the attack the North deployed more mobile rocket launcers near the coastline. Three new batteries are clearly show on the following satellite images taken on November 24, 2010. The images show the new units under camouflage nets, in their firing positions. Part of these positions are protected by earth berms, while others are exposed in the open. The image also shows clear vehicle tracks leading to each of the sites.

All images: Eros B satellite by Imagesat International BV