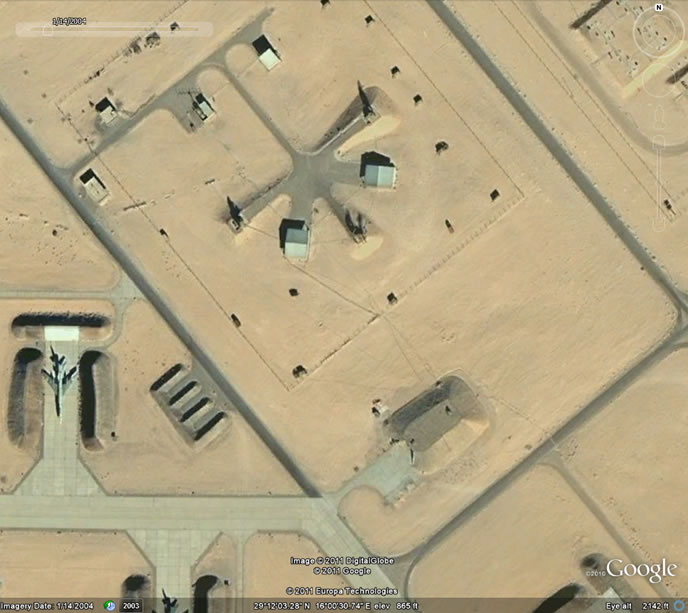 As seen by satellite photos, The Libyan Airbase at Al Jufra remains dormant for years, as aircraft suc as the Tu-22 seen at the lower-left corner havent moved for more than seven years. Nevertheless,since the base is active, and is part of the Libyan air defense network. As part of the NATO counter-air strike, a bunker suspected to support nearby air defense radars was targeted and destroyed, as seen in the photos below. (two penetration hits on the surface, debris nearby, indicating internal explosions.) The attacks spared most of the aircraft at the base, even those which could pose a risk – the MiG-25 seen prepared outside its hardened shelter, indicating some aircraft at the base could still be operational. Photos – above: Google Earth. Below: Imagesat.

While the central air defense network was destroyed by missiles and electronic attack, this SAM-3 surface-to-air missile site in Tripoli was destroyed by eliminating the SNR-125 LOW BLOS engagement radar, denying the site from guiding its missiles.

A similar strike took place at at the desert airbase Okba Ibn Nafa, near the Tunisian border. An SA-3 site protecting the base was destroyed by eliminating the LOW-BLOW target engagement radar and a nearby air defense. alerting radar, supporting the site and airbase air defense. The color photo shows the site in relation to the airbase, as taken by a U.S. satellite in 2004. The image at the bottom shows a close-up of the site, taken March 25, 2011 after the NATO attack.